SEOUL, Feb. 4 (Yonhap) -- South Korea confirmed Saturday the outbreak of bird flu in Seoul, the first time in two years for the pandemic to spread to the capital.

The dead body of a Great Crested Grebe (Podiceps cristatus) water bird was found at a Han River jetty in Seongdong Ward, central Seoul, on Monday, and it was sent to the National Institute of Environmental Research for study.

The state-run institute concluded that the bird was infected with the avian influenza A (H5N6) virus.

According to the government manual on bird flu, the area within a 10 kilometer radius from an infection site is designated as a "monitoring area" that needs to be watched closely for any indications of a further outbreak.

Transportation of poultry, eggs and livestock excretions are also restricted. Nineteen wards including Jongro, Yongsan, Mapo and Gangnam are subject to close monitoring.

The city said it will, over the weekend, sterilize the areas and disinfect vehicles to prevent the spread of the virus.

In February 2015, the city confirmed the outbreak of the H5N8 bird flu virus in the same ward. 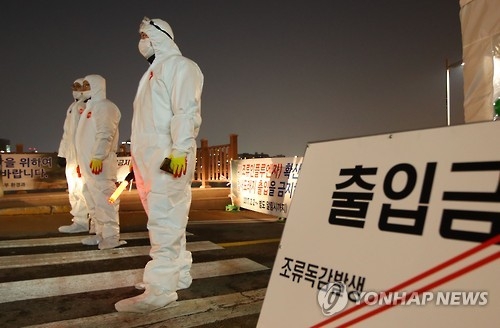