The combined revenue of local duty-free stores hit a record high of 12.2 trillion won (US$10.4 billion) last year, according to the Korea Customs Service.

Despite growth in sales, business conditions for the nation's duty-free shops do not look rosy.

"Profitability has worsened due to an increase in costs in general amid deepening competition from a considerable rise in the number of duty-free stores," an industry official said. "Excessive competition is occurring as they are staging a reckless marketing campaign for survival." 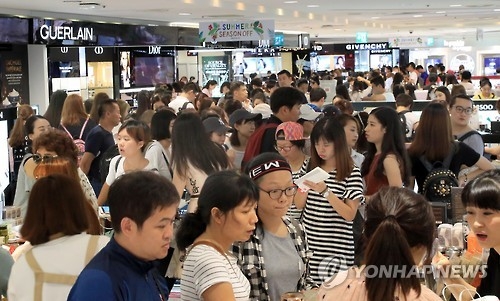 Lotte Duty Free is projected to have reaped 5.9 trillion won in sales last year, a sharp rise from 4.3 trillion won in 2015. But its operating profit ratio has dropped to 6-7 percent from 8.9 percent in 2015.

Another problem is that local duty-free outlets are excessively dependent on Chinese customers.

It means the stores are susceptible to a sudden drop in the number of Chinese tourists here, with Seoul and Beijing locked in diplomatic stand-offs over Washington's plan to deploy a THAAD missile defense system on the peninsula.