The fire started at a kids park on the third floor of the four-story building at around 11 a.m., and it was brought under control after about 70 minutes.

No children were inside the 264-square-meter kids zone at the time, as it was in the middle of being demolished. There were a lot of combustible materials there that created toxic gases when burned.

Firefighters said they found the bodies of three men and one woman. 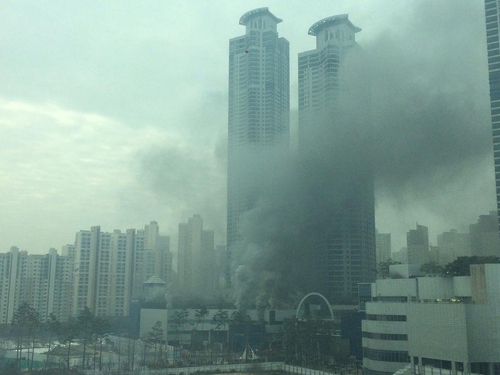 Plumes of smoke were seen billowing from the building. Residents of the main Metapolis apartment complex were immediately evacuated.

Dozens of residents were sent to nearby hospitals for smoke inhalation but none are in critical condition, according to the authorities.

They are investigating the exact cause of the fire.

Metapolis is a residential and commercial complex constructed in 2010. It includes four residential towers: two 66-story ones, one 60-story tower and another with 55 stories. They include a total of 1,266 households.

The fire occurred in the shopping mall linking two of the buildings.
lcd@yna.co.kr
(END)