This massive rally marked the 14th candlelight vigil that has been held almost every weekend since the scandal broke out. The gathering resumed after a break for the Lunar New Year holiday last week.

With over 2,100 civic groups claiming to join the rally, demonstrators took to the central streets of Seoul. They called for the president's immediate resignation and demanded the Constitutional Court speed up the impeachment trial.

The number of people gathered cannot be confirmed but the square near the presidential office was crowded. 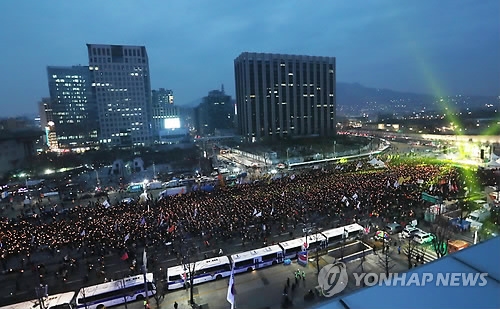 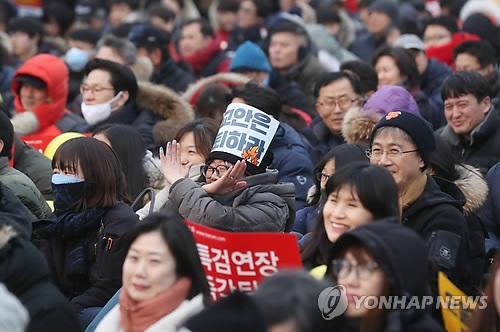 The rally came a day after the special council team investigating the corruption scandal tried in vain to enter Cheong Wa Dae in a raid and secure necessary documents and evidence that could help back up charges against the president.

The investigation team sent a formal document to Acting President and Prime Minister Hwang Kyo-ahn, asking him to authorize a search of Cheong Wa Dae, but it was known that he agreed with the presidential office's stance.

In a statement, the protest organizers called the presidential office a "crime scene" full of evidence, adding that it is an "abuse of power" to block the move to execute the court-approved raid.

The corruption scandal has engulfed the nation since late November, leading parliament on Dec. 9 to vote for impeaching Park. Close aides to the president, including her chief of staff, were arrested in connection with the scandal.

Park is suspected of being an accomplice in the scandal in which her longtime friend Choi Soon-sil allegedly meddled in state affairs and pressured conglomerates into making donations to two foundations controlled by her by using her close ties to the president.

The Constitutional Court is currently reviewing whether to unseat or reinstate her, and should make a decision within 180 days of the day Park was impeached. South Korea is expected to have a presidential election this year, earlier than expected, if the court approves the impeachment. 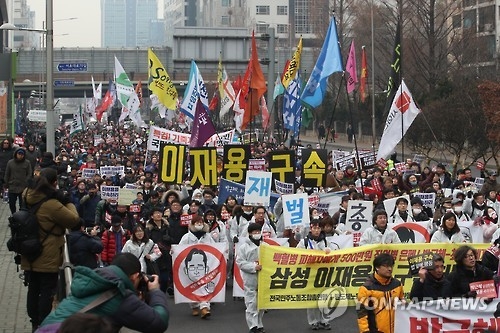 A rally was also held in southern Seoul, with people gathering in front of a court that rejected last month a request for an arrest warrant for Lee Jae-yong, the vice chairman of Samsung Electronics Co. and Samsung Group's de facto leader.

They demanded his immediate arrest to face a probe into his alleged involvement in the scandal. He is suspected of giving or promising to offer some 43 billion won (US$37.5 million) worth of bribes to Park's jailed friend Choi in return for business favors.

They argued that the scandal was politically motivated and based on fabricated evidence presented by the media, while demanding the impeachment be overruled and the special investigation team be disbanded.

The organizers claimed that around 1.3 million people gathered but it cannot be independently verified.

Police said that they deployed around 14,000 officers to maintain order and prevent clashes. No major incidents between pro- and anti-Park demonstrators have been reported.
(END)