PYEONGCHANG, South Korea, Feb. 4 (Yonhap) -- The cross-country skiers who competed on the future Olympic courses in PyeongChang for an International Ski Federation (FIS) competition said Saturday they find the tracks challenging but fun.

More than 90 cross-country skiers have raced on the tracks at Alpensia Cross-Country Skiing Centre for the FIS Cross-Country World Cup in PyeongChang, an alpine town in Gangwon Province located some 180km east of Seoul this week. The FIS competition is one of the test events for the 2018 PyeongChang Olympics.

Built on a land originally used as a golf course, the PyeongChang Olympics will use two different racing lines, each with four varying course lengths -- 3.75 km, 3.3 km, 2.5 km and 2 km -- for the cross-country events.

"It's not the first time we're competing on the golf course," FIS Cross-Country Race Director Pierre Mignerey said. "We know venues had to be used for something else in the summer, so it's not a problem for us."

The skiers said the courses here are tough and are good in condition even compared to those in Europe.

Gleb Retivykh of Russia, who topped the men's 1.5km sprint classic Friday, said he would pick PyeongChang as one of the difficult tracks that he's experienced.

"I found that downhills are very difficult," he said. "But since there's going to be an Olympics here, I think it needs to be difficult."

Elizabeth Stephen, who finished second in the women's skiathlon, agreed that the courses are difficult, but she said they are fun to ski.

"It has a super challenging sprint course, which I don't know if it will be the same for next year," the American said. "The downhills were also challenging, but it's not like something that makes the skiers look like amateurs. There's ups and downs and I think it's just fun to ski."

South Korean skiers said the courses don't favor homegrown athletes. Even if they practice a lot here, they may still find the courses tough.

"There's no section to rest," said Lee Chae-won, who finished 12th in the women's skiathlon, the highest World Cup finish for a South Korean. "I want to say that these courses are as difficult as ones overseas."

The FIS said there could be some changes to the courses after the test event, but that's for the good of the Olympics and the athletes competing here.

"The courses that we are using right now probably will be 95 percent the same as we use at the Olympics," said Mignerey. "We will learn things from this event and change a few details, but the basic courses around the stadium will be always used in all competitions." 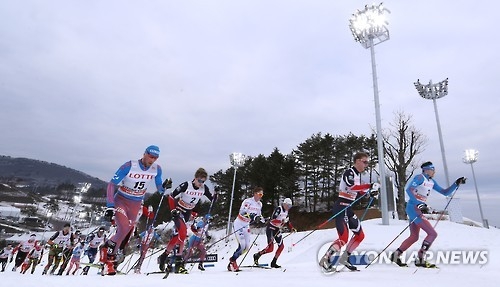