Rydzek was the second-best ski jumper on the 140m hill with an effort of 135.5m for 132.6 points, which placed him 29 seconds behind ski jumping leader Mario Seidl of Austria, who jumped 136m, prior to the cross-country section.

However, Rydzek posted a time of 24 minutes 43.9 seconds in the 10km race, which eventually gave him a 20 second lead over Seidl, who clocked a time of 25:32.9 in cross-country skiing.

The victory moved Rydzek up as the World Cup leader of the season over his compatriot Eric Frenzel, the reigning normal hill Olympic champion.

Frenzel missed the podium by 0.5 second, after his German teammate Fabian Riessle posted a time of 25:51.2.

"It's nice to be here," Rydzek said. "I think I did great performance on the hill and the cross-country course as well. I'm happy."

For Seidl, this was the first podium finish of his career.

"It feels very good," he said. "This is my first time on the podium, so I'm very happy."

The FIS Nordic Combined World Cup is one of the test events for the 2018 PyeongChang Olympics. It is also the first time that South Korea is hosting a Nordic combined World Cup.

The FIS competition will conclude Sunday with another individual Gundersen large hill event. 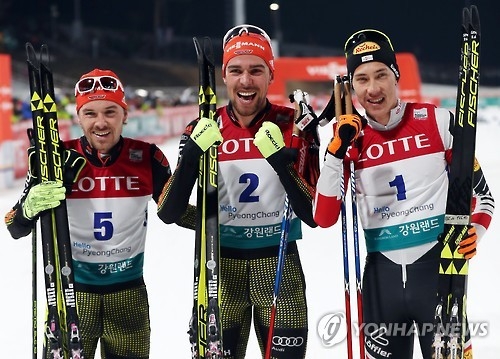