"Secretary Mattis suggested to Minister Han (they) communicate closely around the clock and all year round during their defense ministerial talks on Friday," the source said, referring to the defense chiefs' recent meeting in Seoul. 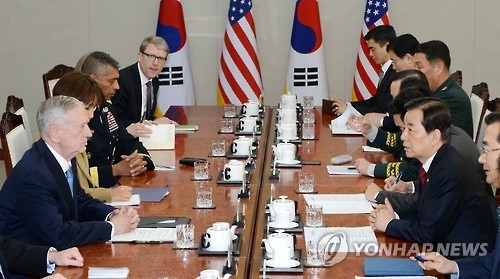 "Han responded that he agreed to the proposal eagerly," the source noted.

The latest proposal reflects Mattis' efforts to ensure a seamless alliance with Seoul at a time when North Korea has threatened to carry out an intercontinental ballistic missile test.

During the talks, Mattis stressed the trustworthiness of their alliance and called for further growth, according to the source.

The secretary also called for brisker communication between working-level defense officials of the two countries, saying he has instructed his subordinates to talk to their South Korea counterparts more closely, the source also said.

Another military source said that during the visit, Mattis also expressed his confidence in the U.S. Forces Korea commander, Gen. Vincent Brooks, who was named under the Obama administration and is likely to continue in his current position after the recent administration change in the U.S.