PYEONGCHANG, South Korea, Feb. 5 (Yonhap) -- Pierre Mignerey, the cross-country race director for the International Ski Federation (FIS), said the South Korean alpine town of PyeongChang and its Winter Games organizers are well on their way to hosting a successful Olympics next year.

Mignerey is in PyeongChang, Gangwon Province, some 180km east of Seoul, to oversee South Korea's first ever hosting of a FIS Cross-Country World Cup. The competition is one of the test events for the PyeongChang Olympics.

"Successful Olympics are based on how sports are played," Mignerey said in an interview with Yonhap News Agency on Saturday. "You have good venue, good courses, good stadium and good snow, although some of things should be pushed and improved for next year. I'm sure we'll have a successful Olympics here."

Mignerey said the cross-country courses at Alpensia Cross-Country Skiing Centre in PyeongChang are "close to perfect."

"The courses that we are using right now probably will be 95 percent the same as we use at the Olympics," said Mignerey. "We will learn things from this event and change a few details, but the basic courses around the stadium will be always used in all competitions."

The Frenchman, who has been the cross-country race director since 2012, evaluated that the test event so far has gone well, although there are some details to improve in operational issues. However, Mignerey didn't want to tag the issues as "problems."

"It's just about that everyone needs to understand exactly what and when he or she needs to do," he said. "Everybody needs time to learn and it's not a problem." 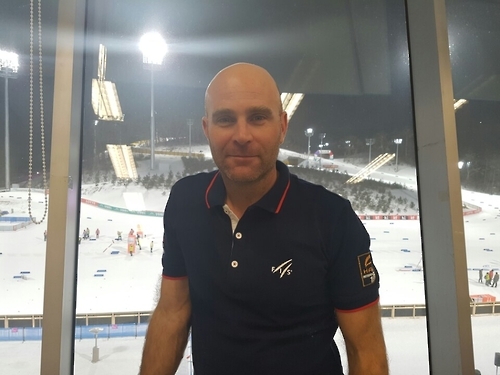 Mignerey said local organizers should learn well from their first hosting of the FIS Cross-Country World Cup, emphasizing that organizing a World Cup or the Olympics is something "completely different" from organizing a Korean championships.

"You have TV, you have marketing and you see that speed of athletes is not the same, so you just have lots of things to do," he said. "But everything can't be done instantly. This is just a learning process and we are learning for next year."

The 44-year-old said the FIS competition should have also served as a good opportunity for South Koreans, where cross-country skiing is not as popular as in Europe, to know what the sport is about.

"I know only one week is not enough to transfer all the knowledge to Korean people," he said. "But some of competition formats are not difficult to understand, and some of them are easy. I would say it was a good opportunity to bring more people into this sport."

"I think it's a good start to have this kind of events and bring people into snow," he said. "For me, the most important thing is to bring people on ski, whether it is biathlon or cross-country. But to have top athletes in skiing is a 10-year project."

Mignerey said Kim Magnus, born to a Norwegian father and a Korean mother and competing under the South Korean flag, could be "locomotive" to lead the country's development in cross-country skiing. But Kim, the double gold medalist at the Winter Youth Olympics last year, didn't race at the World Cup here due to flu-like symptoms.

"He (Kim) didn't compete here, but I'm sure he'll be here next year," Mignerey said. "He has quite interesting potential, so the good results might come earlier for sure." 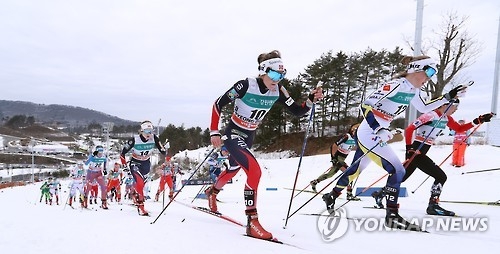 South Koreans didn't get to see some of the world's best cross-country skiers, as they decided to focus on the FIS Nordic World Ski Championships in Lahti, Finland, later this month. Mignerey also lamented the absence of top skiers.

"We had one possibility to make sure that we have everyone here, which was to organize the World Cup Final here," he said. "But it was too late. We were also not sure we would have snow at the end of March. But this is not a problem that has to do with South Korea."

"We're building our calendar four years in advance, but so far, I have no applications from South Korea," he said.

Mignerey, however, said there will be some opportunities because the 2022 Winter Games is going to be staged in China, a neighbor country of South Korea.

"Usually before the Olympic Games, we have the last World Cup weekend," he said. "We couldn't do it this time, because none of your neighbors wanted to organize the World Cup weekend. But that's an opportunity for Korea in the next four years. Together with test events in China or just before the Olympics, we could come back here. The South Korea federation should think about this."