SEOUL, Feb. 5 (Yonhap) -- North Korea's black economy, which is believed to have grown as a market force in recent years, helped the isolated country weather international sanctions last year, according to a researcher at South Korea's state-run think tank on Sunday.

North Korea, which has been under layers of international sanctions over its nuclear weapons and missile program, is expected to focus on stimulating its domestic consumption this year, said Lee Jong-kyu, a researcher at the Korean Development Institute, in a recent report. 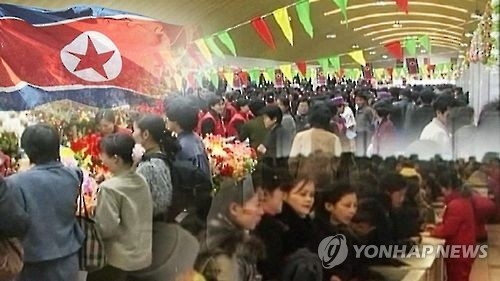 Last year, North Korea mobilized its people for large-scale construction projects under the "70-day" and "200-day" campaigns. Lee said North Korea had no choice but to press its own people to navigate themselves through the economic hardship as international sanctions strengthened.

But, a driving force for the North Korean economy appeared to be its "non-official market," which has steadily grown as the North's regime shows no signs of tightly controlling it, Lee said.

"As the market functioned properly, it appeared to help (the North Korean economy) minimize external impacts," Lee said in the report.

North Korea's economy is estimated to have contracted 1.1 percent on-year in 2015, marking the worst performance since a 1.2-percent decline in 2007, according to South Korea's central bank.

The economic contraction came after the North's moribund economy grew for the fourth consecutive year in 2014. The North's economy may have contracted again last year as it was slapped by stronger U.N. sanctions for its latest nuclear and missile tests.
(END)