SEOUL, Feb. 5 (Yonhap) -- South Korea's agriculture ministry said Sunday it has received a report of suspected outbreak of foot-and-mouth disease in the central county of Boeun and a diagnosis is under way.

The Ministry of Agriculture, Food and Rural Affairs said the report came from a dairy farm of 195 cows in Boeun, 180 kilometers southeast of Seoul, of North Chungcheong Province. 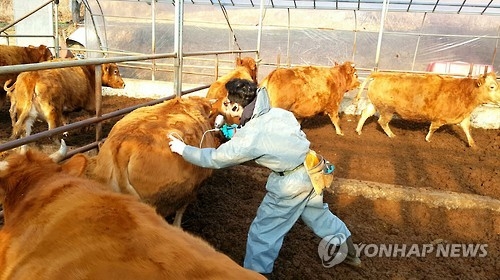 The result of the diagnosis will be announced on Monday, the ministry said.

Foot-and-mouth disease, which does not affect humans, is often fatal for cloven-hoofed animals such as cows, sheep and pigs.

The ministry said it has taken measures to contain the suspected outbreak, including a ban on movements by livestock and people near the farm.