Iran launched the missile on Jan. 29, which flew about 1,000 kilometers. Media reports have since surfaced suggesting that the missile could be the same as North Korea's Musudan missile, which, if confirmed, would mean missile cooperation between the two countries is still ongoing.

But Michael Elleman, a senior fellow at the International Institute for Strategic Studies, said in an article carried by the website 38 North that there is little possibility that the Iranians have tested the Musudan.

While the July 2016 and January 2017 test flights conducted by Iran were largely successful, North Korea's tests of the Musudan failed soon after launch in six of eight attempts, a wide discrepancy that is difficult to explain even if Iran is more capable at missile development, he said.

"Finally, flying a Musudan to only 1,000 kilometers is unnecessary for Iran, since it has a much larger flight corridor within which test flights can be performed and has done so," the expert said.

Should the Iranian missile have used the same R-27 engine as Musudan's, it would "signify that not only does Iran continue to have close missile cooperation with North Korea, it could also develop a road-mobile, two-stage intercontinental ballistic missile capable of striking the U.S. mainland," Elleman said.

"However, such a development would not occur overnight, and would require four or five years of observable flight tests," he said.

The expert said that the more likely possibility is that Iran tested a Shahab-3 medium-range ballistic missile (MRBM) based on North Korea's Nodong missile or a variant of the Shahab-2, based on the North's Scud-C missile that was imported by Iran from North Korea in the late-1980s and early-1990s. 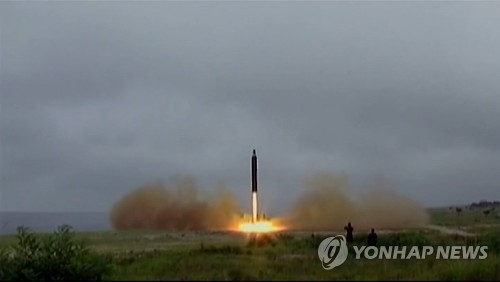