The Ministry of Agriculture, Food and Rural Affairs said that 195 cows at the farm in Boeun, 180 kilometers southeast of Seoul, of North Chungcheong Province, tested positive for the animal disease.

Foot-and-mouth disease, which does not affect humans, is often fatal for cloven-hoofed animals, such as cows, sheep and pigs.

The ministry said it has taken measures to contain the suspected outbreak, including a ban on the movements by livestock and people near the farm.

Another suspected case of foot-and-mouth disease was reported at a cow farm in the southwestern region of North Jeolla Province, raising concerns over a nationwide spread of the epidemic.

The quarantine authorities said a diagnosis is under way and the result will be announced later Monday.

The country has been struggling with rapidly spreading avian influenza for nearly three months, with more than 30 million chickens and ducks culled. 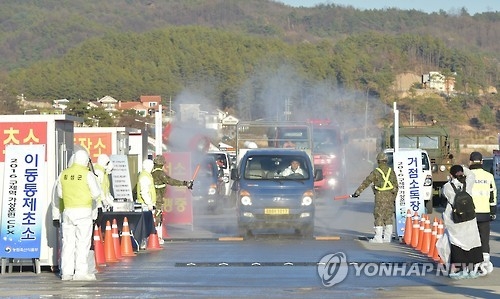