SEOUL, Feb. 6 (Yonhap) -- The new South Korean Olympic speed skating venue will host the world championships this week as its first international competition, with homegrown hopefuls looking to put on a strong show in their Winter Games rehearsal.

The International Skating Union (ISU) World Single Distances Speed Skating Championships will come to Gangneung Oval in Gangneung, Gangwon Province, starting Thursday. Gangneung, some 230 kilometers east of Seoul, will be one of the sub-host cities of the 2018 PyeongChang Winter Olympics. The speed skating competition is an Olympic test event, designed to help the Games organizers hone their operational skills and identify challenges before the real deal.

On the ice, South Korean athletes will try to bag multiple medals and send the partisan crowds home happy.

The world championships will open with the women's 3,000m and men's 5,000m on Thursday, but the host nation's best title chances will be in the men's and women's mass start on Sunday, the last day of the competition.

Former Olympic 10,000m champion Lee Seung-hoon and rising star Kim Bo-reum are each ranked No. 1 in the world in the men's and women's mass start, respectively.

Lee has carved out a nice niche in mass start, a relatively new event in speed skating added to the world championships only in 2015. Lee won the 2016 title, and he has won one ISU World Cup title in mass start this season.

Mass start -- a 16-lap race with all skaters starting at once -- will make its Olympic debut in 2018 at the same Gangneung Oval, and Lee and Kim will try to maximize their home ice advantage. Both are former short trackers who have thrived in their new sport. 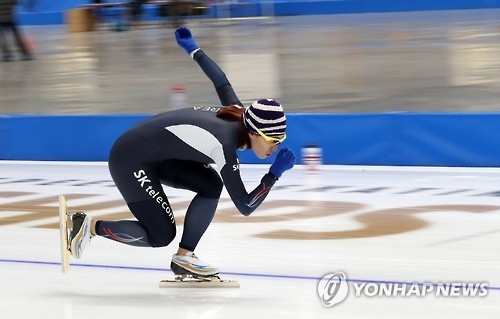 Elsewhere, Lee Sang-hwa, two-time reigning Olympic champion in the women's 500m, will try to salvage a lost season on home ice on Friday.

Lee, the 500m world record holder with three world titles to her name, has gone winless in the ISU World Cup season -- two silvers and one bronze -- while battling injuries.

Her Asian rivals have dominated the competition in the meantime. Nao Kodaira of Japan has gone undefeated in her six 500m races this season to lead the World Cup points race. Another Japanese skater, Maki Tsuji, is in second place on the strength of two silver and two bronze medals. Yu Jing of China is third despite her two victories.

South Korea may also have a shot in the men's 500m on Friday thanks to two youngsters. Kim Tae-yun, 22, has won a World Cup bronze in that event this season, while Cha Min-kyu, 23, grabbed the 500m gold at the ongoing Winter Univerisade in Almaty, Kazakhstan, last week.