The country's inshore and offshore fisheries production came to 923,000 tons last year, down 12.7 percent from the previous year and the lowest yearly catch since 1972, according to the report by the Korea Maritime Institute (KMI).

South Korea's offshore fisheries production had been on the wane since peaking at 1.73 million tons in 1986.

The institute attributed the drop in offshore fisheries production to dwindling fish stocks, which shrank to 72 percent of the 1972 level.

The KMI said Chinese fishermen's illegal fishing in South Korean waters was the main culprit, with the loss of maritime resources reaching 100,000 tons to 650,000 tons per year.

In a complaint filed with the Chinese Embassy in Seoul last year, the National Federation of Fisheries Cooperatives contended that the South Korean fisheries industry suffers an annual loss of 1.3 trillion won (US$1.14 billion) from Chinese illegal fishing. 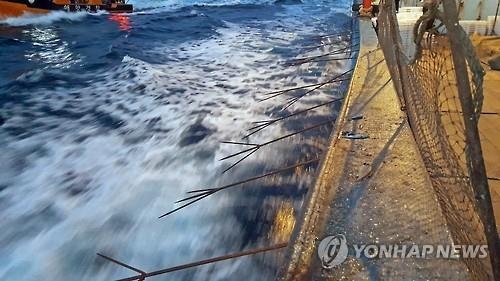 The KMI said that climate change, which has led to rising water temperatures, and overfishing by South Koreans was also responsible for declining fish stocks.

The government, meanwhile, is slated to unveil a comprehensive package of measures to tackle the problem of dwindling fish stocks, including efforts to protect young fish and increased cooperation with Tokyo and Beijing on the issue of climate change.

The issue of illegal fishing has been a source of diplomatic tension between Seoul and Beijing. Tensions flared up anew in October when a South Korean patrol boat sank after being intentionally rammed while pursuing a Chinese boat that was fishing illegally.

As part of efforts to defuse the conflict, the two sides agreed in December that any boat carrying unnecessary equipment, such as pikes or spears that can be used as weapons to resist maritime inspection will be immediately penalized.

The Coast Guard began using firearms, only when deemed necessary, following the sinking.

In mid-January, Acting President and Prime Minister Hwang Kyo-ahn ordered Coast Guard officials to respond firmly to any Chinese fishing boats illegally operating in South Korean waters, in a show of Seoul's strong will to crack down on the practice.
(END)