SEJONG, Feb. 6 (Yonhap) -- Faltering private consumption is dragging down the recovering momentum of the South Korean economy, with the country's production side remaining in the doldrums, a state-run think tank said Monday.

"The Korean economy exhibited a modest recovery in investment, but faltering private consumption is limiting the recovery of economic activities," the Korea Development Institute (KDI) said in its monthly evaluation of the country's economic conditions. "Private consumption growth slowed on deteriorating consumption sentiment."

On a seasonally adjusted on-month basis, December's retail sales fell 1.2 percent to continue its downside trend from November, when it edged down 0.1 percent on-month.

Moreover, the composite consumer sentiment index for January came to 93.3, the lowest since March 2009 when it stood at 75 in the aftermath of the global financial crisis, "on growing negative sentiments in current living standards and economic conditions."

The KDI report said the production side also failed to make a significant rebound to lead overall economic improvement despite a gain in investment and exports.

Output of the service sector grew 1.7 percent in December from a year earlier, slowing from the previous month's 2.7 percent on-year rise, due largely to a cooldown in the real estate market.

Mining and manufacturing production rose 4.3 percent on-year in December on the back of brisk demand for semiconductors and increased workdays, while the manufacturing capacity utilization rate fell to 73 percent, indicating that the sector is suffering from a continued slump in overall production.

On the other hand, exports jumped 11.6 percent on-year in January to mark the first double-digit monthly growth in nearly three years on brisk sales of Korean-made chips and rising oil prices.

Equipment investment also rose 10 percent in December on the back of a sharp increase in semiconductor manufacturing equipments.

The KDI said its recent survey showed that local economists predicted that Asia's fourth-largest economy will pull off a 2.4 percent growth for 2017, down from 2016's 2.7 percent expansion.

Their forecast is lower than the South Korean government's 2.6 percent and the Bank of Korea's 2.5 percent for this year. 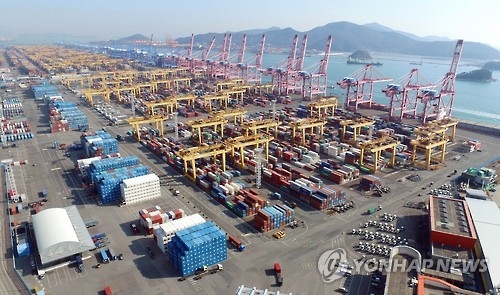