SEOUL, Feb. 6 (Yonhap) -- A Korean comedy-action film about an inter-Korean secret police mission ranked No. 1 for the second weekend at the local box office, giving it a 19-day cumulative audience total of over 6 million, data showed Monday.

"Confidential Assignment" topped the chart for the Feb. 3-5 frame with slightly more than 1 million viewers, according to the real-time based box office tally from the Korean Film Council. Released on Jan. 18, the movie has garnered 6.27 million viewers domestically until Sunday.

Helmed by Kim Sung-hoon of "A Wonderful Moment" (2012), the movie tells the story of two cops from South and North Korea who team up for a joint covert operation to hunt down a North Korean crime ring that has sneaked into the South. 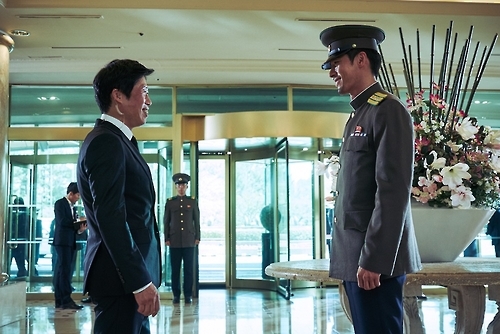 "The King," which premiered on the same day as "Confidential Assignment," stayed at No. 2, adding 409,662 viewers to its domestic audience total of 4.9 million.

Directed by Han Jae-rim and starring Zo In-sung, the movie tells the story of an underdog prosecutor named Tae-soo who rises to power after meeting a senior prosecutor with dark connections to political heavyweights and influential government officials. But Tae-soo suddenly falls from grace and loses his influence with a change of government.

The newly released American sci-fi drama "Arrival" took the third slot with 298,930 moviegoers. Disney's new animated film "Moana" hung on to fourth place with 171,495 in attendance in its fourth weekend of opening. It was followed by Sony's "Resident Evil: The Final Chapter," the sixth and allegedly final installment of the 15-year-old horror-action-sci-fi franchise. It drew 110,264 viewers.