SEOUL, Feb. 6 (Yonhap) -- The head of a group representing the rights of Korean residents in Japan hoped for easing the ongoing diplomatic friction between the two neighbors on Monday by removing a girl statue recently erected before Japan's consulate here.

O Gong-tae, chief of the Korean Residents Union, also known as Mindan, made the appeal before a meeting with Foreign Minister Yun Byung-se in Seoul.

"I would be happy if that happens," O told reporters when asked whether he wants the girl statue installed in December in front of Japan's consulate in southern port city of Busan to be relocated.

A civic group built the statue in a bid to draw attention to Japan's sexual slavery of Korean women during World War II. Japan is demanding its immediate removal and it recalled its ambassador to Seoul in protest in mid-January. 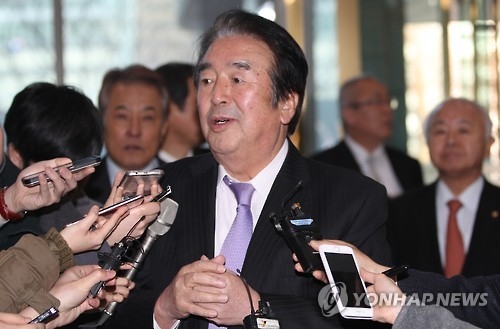 Asked whether the statue issue serves as a major factor in hurting Japan-South Korea relations, he said, "I think so."

O's remarks are in line with what he said in his New Year address. He emphasized that all the Korean residents living in Japan "share" the hope that the statue will be removed.

He and other representatives of Mindan were in Seoul to meet with Yun. The meeting was arranged at the union to deliver the "voices" of Koreans living in Japan.

Mindan is a pro-Seoul organization which was established in 1946, a year after Korea's liberation from Japanese colonial rule, to protect the rights and interests of Koreans living in Japan.

O said that the worsening ties between Japan and South Korea is making it hard for Korean compatriots to live in Japan and make a living.

In welcoming the Mindan chief ahead of the meeting, Foreign Minister Yun promised to make necessary efforts to improve bilateral relations, while asking the union to continue to serve as a "bridge" between the two countries.