SEOUL, Feb. 6 (Yonhap) -- South Korean motorists pay much higher oil taxes than their counterparts in the United States and Japan, a report said Monday, sparking calls for the government to lower them.

According to the report by online crude price provider Opinet, gasoline prices in South Korea averaged 1,455 won (US$1.28) per liter in December last year, with taxes accounting for 62.3 percent of the price, or 905.75 won.

South Korea imposes a flat sum of three different taxes on petroleum products, including transportation-energy-environment and education taxes. Also added are an import levy of 16 won per liter, a tariff equivalent to 3 percent of crude prices and a value added tax amounting to 10 percent of the retail price.

In January, the proportion of taxes dropped to 60 percent in line with rising gasoline prices.

An industry source said that the percentage of taxes to gasoline prices has remained in the 60 percent range since 2014, when international crude prices entered into a low-price phase. 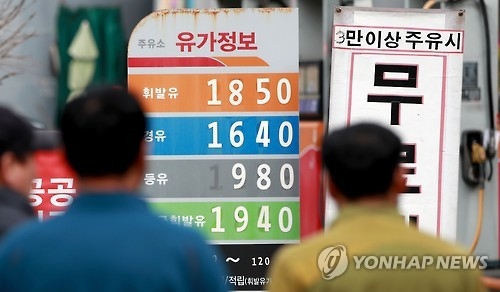 Taxes account for a far greater share of retail gasoline prices in South Korea than in the U.S. and Japan. In November, the portion of taxes stood at 61.5 percent for South Korea, while comparable figures were 52.9 percent for Japan and 20.9 percent for America.

Some experts call on the government to reduce oil taxes that are "excessive and irrational," which they claim has resulted in mass production of ersatz oil products.

Others argue that the current oil tax system should remain intact because South Korea relies entirely on imports for its oil needs and a cut would run counter to government efforts to reduce greenhouse gases and fine dust.

The government has started research on revising the current oil tax system, but a finance ministry official said nothing has been determined yet.
(END)