SEJONG, Feb. 6 (Yonhap) -- South Korea will intensify overseas promotion marketing efforts and build more maritime facilities in an effort to lure 2 million cruise tourists from all over the world, the government said Monday.

The Ministry of Oceans and Fisheries said it will hold the so-called "Port Sales" event in cities of the United States, China and Japan starting from March, with major cruise liners and travel agencies attending.

It will also build five additional cruise docks in four seaports including Busan and Incheon, adding to the current six, and expand passenger terminals there in a bid to absorb the growing number of cruise passengers.

The cruise industry is one of the fastest-growing sectors in Asia on the back of massive demand from China.

A total of 1.95 million tourists visited South Korea through the cruise line in 2016 with 791 port entries. For 2017, the South Korean government is expected to attract more than 2 million cruise tourists with 986 arrivals.

Since 2010, the number of cruise travelers to South Korea has increased at an annual rate of 47 percent, with the figure topping 1 million in 2015 for the first time. 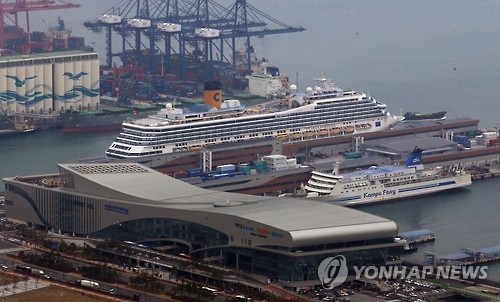