In his address to the National Assembly as a party representative, he expounded on policy proposals to address "five cliffs" facing the nation: weak exports, flagging consumption, high youth unemployment, shrinking population and diplomatic challenges.

The founder and former chief of the minor opposition party, in particular, stressed the importance of overhauling the country's educational system to nurture more creative brains and help the country stay ahead in the global industrial competition.

He also called for the introduction of a run-off presidential vote to ensure the head of state secures more powerful popular mandate.

Touching a broad range of national challenges, his address seems to be an announcement of his election pledges as the entrepreneur-turned-politician is girding for his second bid for the presidency later this year.

In 2012, Ahn gave up his candidacy to back Moon Jae-in, former leader of the main opposition Democratic Party.

Ahn ranked in fourth place with a 10.9 percent approval rating, up 2.4 percentage points from a week earlier, in a Realmeter poll conducted between Thursday and Friday and released on Monday.

For educational reform, he proposed incorporating a kindergarten program into the public education system and enabling students to advance into tertiary education or enter the job market one year earlier than the current system.

"We have to open up new land for opportunities through revolutionary change in the educational sector so as to stay ahead of other countries in terms of securing future dynamos and future jobs," Ahn said. 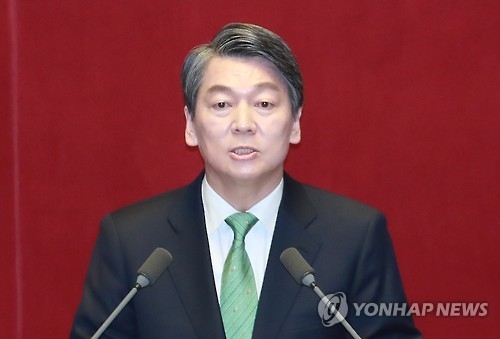 Ahn, in particular, stressed the importance of the country adapting well to the era of the so-called fourth industrial revolution, the ongoing transformation characterized by the convergence of cutting-edge technologies such as big data, artificial intelligence and virtual reality.

He criticized Moon's recent call for a government-led drive to cope with the industrial transformation, pointing to the need for the civilian sector to spearhead the revolution.

Ahn, then, underscored that the government must nurture human resources through an educational reform, ensure fairness in industrial competition and provide support in various realms such as the protection of intellectual properties.

Ahn also renewed his call for a run-off election, saying it would help a president -- with backing from more than half of the voters in a run-off vote -- stably push for a series of reform tasks, which the nation is in need of.

He went on to say that after passing the bill for the run-off election, the parliament can ask the Constitutional Court to review its legality. Some have raised concerns about the run-off system as there is no specific legal ground to enforce it in Korea.

On the defense front, Ahn said that he would seek to raise "smart troops" based on the South Korea-U.S. alliance to ensure military superiority over North Korea and reshape the army-dominated military structure to expand naval and air forces.

Ahn also called on the parliament to use the extraordinary legislative session this month to pass a series of reform bills that include those aimed at lowering the minimum voting age to 18 and introducing the run-off election.