In a meeting with South Korean lawmakers last month in Hawaii, Adm. Harry B. Harris, Jr., commander of the U.S. Pacific Command brought forth the idea of having the country's largest missile destroyer operating near the resort island of Jeju or Jinhae, 410 kilometers south of Seoul, the Ministry of National Defense confirmed.

"We haven't received any official offer (from the U.S. military) in regard to the deployment of the Zumwalt. If the U.S. officially makes such a suggestion, we will give serious consideration," Defense Ministry spokesman Moon Sang-gyun said in a press briefing.

Seoul has good reason to give such a proposal due consideration since it has to counter North Korea's evolving nuclear and missile threats, the spokesman said.

The US$4 billion multipurpose ship was named after the legendary Navy officer Zumwalt who served during the Korean and Vietnam conflicts. It was unveiled by the U.S. Navy in October and carries state-of-the-art weaponry and stealth capabilities.

Washington said the Zumwalt is hard to detect by radar systems and is armed with the SM-6 ship-to-air missile and the Tomahawk long-range cruise missile as well as numerous anti-submarine weapons. 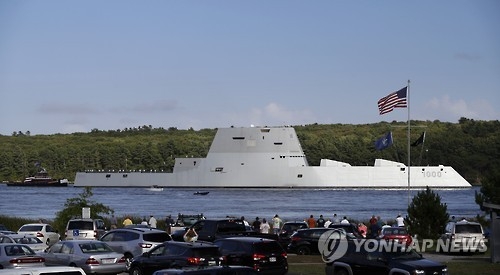