SEOUL, Feb. 6 (Yonhap) -- A wax figure of the popular Korean actor Park Hae-jin will go on display in a global museum of wax dolls in Hong Kong from next month, his agency said Monday.

The actor will unveil his wax figure in a ceremony at a "hallyu" themed exhibition room of Maadame Tussauds Hong Kong, Mountain Movement said. Hallyu refers to the Asia-wide popularity of Korean pop music, TV shows and films.

There are wax dolls for other hallyu stars such as Bae Yong-joon, Kim Soo-hyun, Lee Jong-suk, Suzy, Siwon of Super Junior, U-know and Max of TVXQ and 2PM's Nichkhun at the exhibition room.

"I'm really happy to get to have a wax figure that looks just like me," Park was quoted as saying after finishing seven hours of body size measurement for the museum.

Park gained fame among Chinese viewers after the 2014 SBS TV series "My Love from the Star" and 2016 tvN drama "Cheese in the Trap" became huge hits overseas. 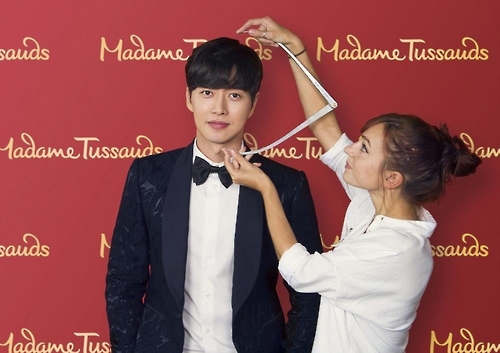