SEOUL, Feb. 6 (Yonhap) -- South Korean girl groups TWICE, Gugudan and Lovelyz are set to release highly anticipated albums this month and battle it out for the domestic music charts crown.

A short video clip uploaded Sunday on Yonhap News Agency's entertainment YouTube channel TongTong TV introduces one of 2016's most influential girl band TWICE, seeking to carry on its winning streak of online music streaming and album sales, and the two rising rookie groups determined to catch up and win top awards at year-end music awards ceremonies this year. TWICE will roll out its album on Feb. 20 and Gugudan on Feb. 28, while Lovelyz has not made the release date public yet.

Prior to the album's release, TWICE will hold its first individual concert "TWICE Land - The Opening" from Feb. 17-19 at SK Olympic Handball Gymnasium in Seoul's Olympic Park, a popular venue for K-pop concerts and fan meetings. The nine-member act has been riding a huge wave of popularity with its hit tracks "Like OOH-AHH," "Cheer Up" and "TT" all generating more than 100 million YouTube views. Moreover, the group's third album has sold over 350,000 copies, the most for a girl group in the K-pop music scene.

Gugudan, a nine-member act from Jellyfish Entertainment, debuted in June 2016 with a "mermaid" concept. The band has drawn the public eye since it was joined by Kim Se-jeong, Kang Mi-na and Kim Na-young, three participants of Mnet's recent hit survival audition show "Produce 101," where the members have already proven their musical prowess.

The eight-member group Lovelyz was relatively obscure in South Korea but popular in Japan with its debut album "Girls' Invasion" released in 2014. The album ranked ninth on Taiwan's Five Music's weekly chart and first on Japan's Tower Records albums chart. The group rose to stardom in Korea with its single "Ah-Choo" in 2015, which has maintained its position on most major local music charts.

The impending releases of the albums have spiked the interest of fans who look forward to the girls' musical maturity and the new genres they will explore and showcase. 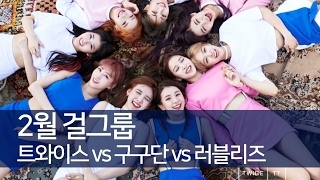