The aide said that though Park's legal representatives and the independent counsel team are still fine-tuning details about the planned questioning, it could likely take place on Thursday or Friday. If conducted, it would mark the first time for a sitting president to be questioned in a probe.

"(We expect) the questioning to occur near the end of this week," he told Yonhap News Agency over the phone, declining to be named. "(The two sides) are converging on the idea of carrying out the interrogation inside the presidential office (for security reasons)."

Tensions flared anew between the two sides last Friday after the presidential office refused to allow special prosecutors to search its compound citing security concerns. Some anticipate the investigators could try again to raid Cheong Wa Dae before questioning the president.

Park was impeached on Dec. 9 over a corruption scandal involving her and her friend Choi Soon-sil.

Park is alleged to have colluded with Choi in extorting money and favors from local conglomerates, and to have allowed Choi to meddle in important state affairs.

The president has denied the charges. In a recent interview with a conservative news outlet, she raised suspicions that someone premeditated the scandal to bring her down with "preposterous, colossal" lies.

On Friday, Park submitted a written statement to the Constitutional Court to rebut the charges again. The top court is to determine whether to remove her from office or reinstate her by early July. 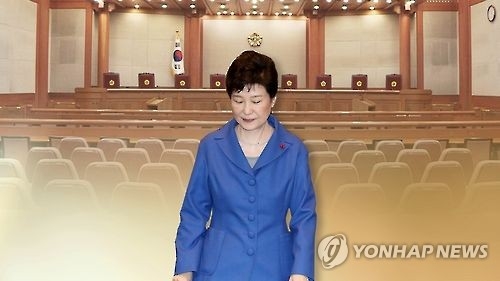 Park expected to undergo questioning this week at her office

Park expected to undergo questioning this week at her office