Kim Ki-choon, Park's chief of staff from 2013-2015, submitted a statement to the Constitutional Court detailing the reason for his planned absence from a hearing scheduled for Tuesday. 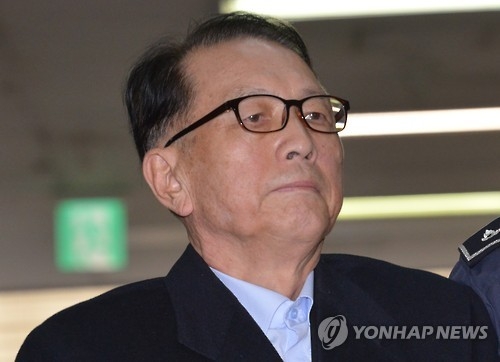 "It will be difficult for me to attend the hearing due to health reasons," Kim said in the statement, according to a court official who spoke on the condition of anonymity. "I will rest for several days and then attend (the trial) if there is a request."

Kim, 77, attached a doctor's note to his statement, the official said, declining to elaborate on his exact health condition. The court can postpone Kim's attendance or bring him in by force.

The former chief of staff is currently under arrest on suspicion of orchestrating the creation and execution of a blacklist that banned thousands of liberal artists, writers and filmmakers from state support.

He is seen as a key witness who could testify on the various allegations that led to Park's impeachment, including her alleged collusion with her friend Choi Soon-sil to extort money from conglomerates and her suspected neglect of duty during a 2014 ferry disaster that killed more than 300 people.

On Friday, Park submitted a response to the court's renewed request for a detailed explanation of her whereabouts during the early hours of the sinking.

However, Park offered no additional details and made a referral to the earlier statement, according to sources with knowledge of the issue.

Park has denied all charges as the court determines whether to reinstate her or formally remove her from office.