As expected, the restaurant business logged its worst output in more than four years in the same quarter, the most recent numbers from Statistics Korea showed.

Production in the overall restaurant sector dropped by 3 percent in the fourth quarter of last year compared with the year before, the biggest fall since 5.1 percent in the second quarter of 2012. The slump was especially hard on everyday dining places that people frequent when eating out. The output dropped 5 percent on-quarter in the segment, also the biggest slide since the second quarter of 2012, when it fell 8 percent.

The restaurant industry began to shrink at the start of 2015. The retreat has continued for eight straight quarters since then.

Office cafeterias, where meals are comparatively cheaper, boomed in business by contrast, seeing their best output in seven quarters, statistics showed. Output in the sector rose 4.3 percent, the best since a 5.6 percent increase in the first quarter of 2015. It is nearly quadruple the steady 1 percent growth throughout 2016.

"Consumer sentiment is plunging to its worst level from a combination of political instability, the economic slump and the anti-corruption law," said professor Kim Kwang-seok of Hanyang University in Seoul. "The effect from the law will show up more firmly when we have the output statistics from the Lunar New Year period."

The anti-corruption law, enacted in September 2016, sets caps on the price of gifts that can be exchanged between people with personal interests at stake and on free meals. Business owners are demanding major revisions to the law, claiming heavy damage from price limits they say are unrealistic. 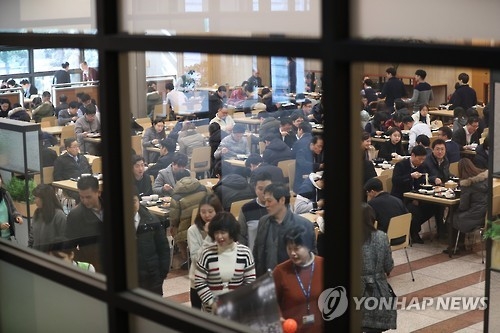