SEOUL, Feb. 6 (Yonhap) -- When Lee Hae-seong took to the streets in late October, angered by the South Korean government blackballing artists, he never imagined that Gwanghwamun Square would be his temporary home for the forthcoming brutal winter.

In the beginning, he didn't mean to become a permanent resident of the small anti-government community that had staged a sit-in. Since early December, however, he's joined a few dozens of people who have set up the tents to occupy the plaza in downtown Seoul in a symbolic act of protest.

"It is not that I have a bigger sense of duty than others. I just feel the same way as the protesters who have gathered here for the last few months. What is happening just doesn't make sense to me at all," Lee said in a recent interview with Yonhap News Agency. 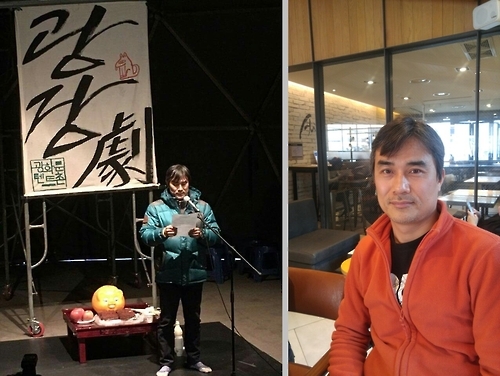 As Lee's been spending more time there, he has begun to see things he could do as a writer and producer to show more support for and solidarity with the growing protesters.

In early January, a 100-seat makeshift theater, aptly named Black Tent, as it is run by blacklisted artists and actors, was set up, adding yet another symbolic meaning to the plaza, the center of public protest against the corruption and influence-peddling scandal involving President Park Geun-hye and her longtime friend Choi Soon-sil.

"By setting up a public theater, we bring in ignored and exiled voices. We listen to the oppressed and the weak. We respect differences and diversity. In this theater, even conflict and feud lead us in the direction for a better future," read the statement released on Jan. 7 by the organizers of the theater, led by Lee.

The theater ran four plays from Jan. 16-Feb. 3 in the evenings in subzero temperatures. The theater has entered Season 2 now, with four more plays and several music and mime performances throughout March 3. Topics cover contentious issues, ranging from labor to censorship to the "comfort women," who were forced to provide sexual slavery to Japanese soldiers during World War II.

He admits that the harsh weather is freezing cold when sleeping at night. One morning, he found his toothpaste and facial cream rock-hard after they froze overnight.

"It is not a time to seek personal happiness. I think it can be put on hold. Unless we correct things, it won't be possible for people to lead a normal life." 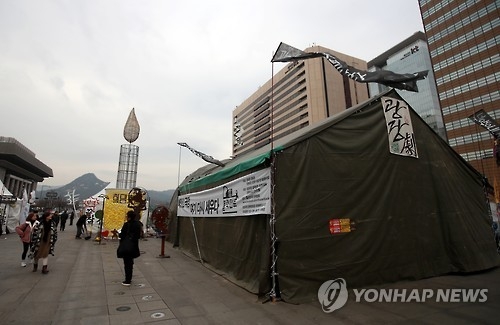 In December, the National Assembly impeached the president. Hearings for Park's impeachment trial are taking place at the Constitutional Court to determine whether to permanently remove her from the post.

Last month, Culture Minister Cho Yoon-sun and Kim Ki-choon, a former presidential chief of staff, were arrested on charges of creating a blacklist of thousands of artists deemed progressive and hostile toward the government, and denying them state-run support programs.

Lee, one of those blacklisted and the president of Theater Company Gorae, said he started feeling the tightening pinch in the spring of 2015. It was after he signed up for a petition, along with some 600 artists, including popular actor Song Kang-ho of "Snowpiercer" and the "Old Boy" director Park Chan-wook, to repeal the government's ordnance that they considered would seriously limit the scope of the independent investigator's probe into the cause of the 2014 Sewol ferry sinking. The disaster took 304 lives -- mostly high school students on a school field trip. 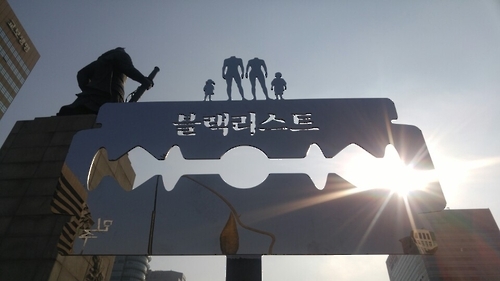 "I've been in this field since 1988 as an actor, a writer and a producer, and I've never experienced this kind of political pressure before," he said. "Since 2015, the government's support has suddenly and completely stopped. There was even a confession from an insider from the Arts Council Korea that they were ordered to exclude my company from government support programs."

And he is not alone in this, he said.

"The pressure is being felt by the entire theater industry. A play is one of the most contemporary art genres and is, by nature, at the forefront of criticizing and satirizing any subject, including the government. It is relatively easy and takes lesser time and money to create a relatable play."

When he wakes up early in the morning to step outside the tent, darkness still reigns and a sense of emptiness hits him, he said.

"I hope things get resolved in spring when flowers blossom. Or will it?" he wondered. "I am worried if things will change. The establishment is just too powerful."