Seol, 38, was named an assistant to head coach Uli Stielike earlier Monday. The Korea Football Association (KFA) said Seol will join the Taeguk Warriors' coaching staff starting March 1 and will serve until the end of the 2018 FIFA World Cup in Russia, should South Korea qualify.

"I feel honored, but I also feel a heavy responsibility," Seol said at a press conference at the KFA headquarters. "I will help Stielike and give my utmost effort for the national team to qualify for the World Cup and do well at the World Cup."

Seol, a member of the semifinalist South Korean team at the 2002 FIFA World Cup, has been coaching Seoul-based Sungkyunkwan University since 2015. The former forward and winger said he feels bad for his college players, but couldn't pass up the national team offer.

"I always thought it would be a big honor to serve the national team," he said. "You don't get this kind of opportunity every time." 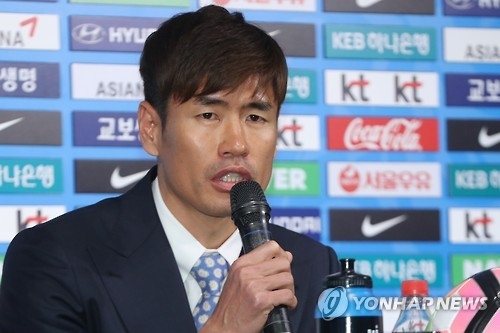 Seol made his name in Europe. He had his pro debut with Belgian side Royal Antwerp in 2000 and moved to RSC Anderlecht a year later, where he became the first South Korean to score at UEFA Champions League.

Seol then joined English second-tier club Wolverhampton Wanderers in 2004, and went on to play for the England Premier League clubs Reading and Fulham. He also had a brief stint in Saudi Arabia and played for three South Korean clubs before hanging up his boots in 2014.

For South Korea, he made 82 appearances with 19 goals and played at two FIFA World Cups.

Seol said his playing experience will help the national team, even though he may lack in coaching experience.

"I know I don't have coaching experience in the pros, but what's important in this journey to the World Cup is that you have to know the opponents and the our team well," he said. "I have lots of experience in Europe and with the national team. I believe my experience can help the team."

Seol wasn't the first choice for the job since the KFA technical committee was originally trying to hire a foreign coach to support Stielike. But since the committee failed to find a foreign coach due to contract period issues, it picked Seol instead.

"When I first heard Stielike wanted me, I was also curious why he picked me," he said. "Although the national team is currently facing Asian countries, Stielike was thinking about the team at the World Cup and that's why he wanted to have a coach with some experience in Europe."

South Korea are playing in the final round of the Asian qualification for the 2018 World Cup. They're in second place in Group A with 10 points after five matches, one point behind Iran, with Uzbekistan, Syria, Qatar and China trailing. South Korea will face China and Syria to resume the qualification campaign in March.

Seol said he doesn't know exactly what his responsibilities will be, but said his work will be different from that of Cha Du-ri, another 2002 World Cup member who joined the national team as advance scout in October.

"It's not only myself; I think Stielike and Cha would also know that the team's performance and results have not been satisfactory in the final round, considering the talent of our players," Seol said. "But what I want to emphasize is that I know I should help the players to display their best performance when they join the national team."

Seol said he is confident he can best understand the players, especially those who play in Europe.

"Some of the national team members are playing in Europe and they're core members for us," he said. "Cha and I didn't do well in Europe like those players, but we had played there in difficult environments, so I think we know how they feel and what they want on the national team."