The passage followed Hwang's refusal last Thursday to join the session on the grounds that his attendance at the session for long hours could lead to a government vacuum in case of a national emergency.

The two-day interpellation session begins Thursday. The motion calls for Yoo Il-ho, deputy prime minister for economic affairs, to attend the session on economic issues on Thursday, and for Hwang to join the non-economic session the following day.

Hwang attended a parliamentary session in December. But he said his attendance at the time was to respond to "citizens' calls" to explain his policy direction and based on his understanding that the parties demanded his attendance only in the December session.

Hwang took over as the acting president on Dec. 9 after President Park Geun-hye was impeached over a corruption scandal involving her and her longtime friend Choi Soon-sil.

Opposition parties have been seen keeping Hwang in check as his name has been floated as a potential presidential contender.

Since former U.N. Secretary-General Ban Ki-moon renounced his presidential ambitions on Wednesday, Hwang has been touted as Ban's replacement to carry the flag of the conservative bloc. Hwang has so far remained noncommittal about whether to run in the election.

In a Realmeter poll conducted between Thursday and Friday and released on Monday, Hwang ranked third with 12.4 percent support, trailing Moon Jae-in, a former leader of the Democratic Party, with 31.2 percent and South Chungcheong Province Governor Ahn Hee-jung with 13 percent. 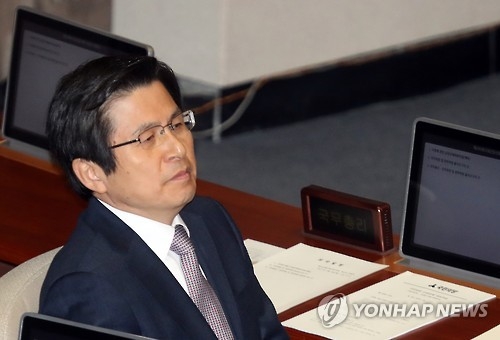