SEOUL, Feb. 7 (Yonhap) -- A major political scandal may have marred PyeongChang's preparations for the 2018 Winter Olympics in recent months, but its chief organizer said Tuesday the focus is now solely on making the competition a success.

Choi Soon-sil, a close confidante of Park's, is accused of using her ties with the president to meddle in state affairs. And investigators have also alleged that Park sought to award lucrative Olympic construction contracts to a Swiss firm linked to Choi's businesses. 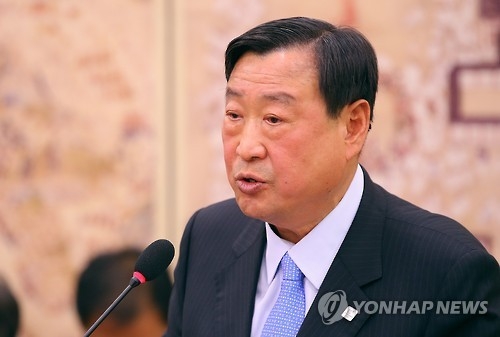 Lee has repeatedly insisted that construction contracts for the Olympics have been handled in a "transparent" manner. He acknowledged the scandal had been "the most challenging obstacle" in the build-up to the Olympics, with the countdown reaching one year on Thursday.

"Due to a series of unsubstantiated rumors, a negative image was attached to the PyeongChang Winter Olympics," Lee said. "Some even went as far as saying we should give up on hosting the Olympics. But fortunately, the prevailing opinion is that we should all try to restore our national pride with the Olympics. And we're concentrating only on holding a successful Olympics."

The scandal hasn't just affected PyeongChang's image. The business community has been reluctant to open its collective wallet to support the Olympics, with the nation's major corporations also implicated in the scandal, and Lee has been struggling to secure sponsorship deals.

Lee said PyeongChang's goal is to bring in 940 billion won (US$829 million), and it has reached just under 90 percent of the target. Lee added he's trying to get public corporations more involved.

PyeongChang and its nearby sub-host cities, Gangneung and Jeongseon, have been hosting Olympic test events since last February in sports such as alpine skiing, snowboarding, short track speed skating and cross-country skiing.

With even more competitions scheduled over the next two months, Lee said the Olympic preparation "has gone past the planning stage and moved into the execution phase."

"In terms of hardware, our six new venues are more than 96 percent complete, and other Olympic-related facilities are on schedule," Lee said. "As for our software, we continue to identify areas for improvement through test events. In regards to volunteering, transportation and accommodations, things are going smoothly."

Through last weekend, PyeongChang has staged eight test events. Lee said while he's been pleased with the overall operation, he detected issues with parking, sound systems at venues and transportation.

"We can't afford to commit the same mistakes at the Olympics," he added. "We have to pay attention to every little detail. And after each test event, we've been holding post-mortem meetings to discuss what needs to be done in the future."

Above all, Lee said the key to a successful Olympics will be active participation and support from the people.

"We want to create an environment where anyone can take part and have fun," he said. "We're trying to convince our people that we're ready to stage a successful Winter Olympics. We hope our test events will help ratchet up Olympic fever."

Lee said the PyeongChang Olympics will promote the value of peace, and it will keep the doors open to North Korea, just like all other International Olympic Committee (IOC) member nations.

"Any peace-loving nation has the obligation to take part in the Olympics," Lee said. "If North Korea wants to come to PyeongChang, we'll take steps in accordance with international standards and competition rules."