"Considering the current situation, grounds do not seem to be sufficient (for the court) to uphold Park's impeachment," Kim, a staunch rightist and a member of the ruling party's ad-hoc leadership committee, told a news conference.

"It is true that some of the people surrounding her did apparently engage in corruption, but the allegations against President Park have yet to be verified."

Last year he was a member of a party group which called for her impeachment and expulsion from the party. Observers said his reversal of position appears intended to sound a clarion call for conservatives and Park's supporters who have taken to the streets in recent weeks to demand her reinstatement.

Kim, who led Gyeonggi Province from 2006-2014, has been mentioned as a potential presidential contender. 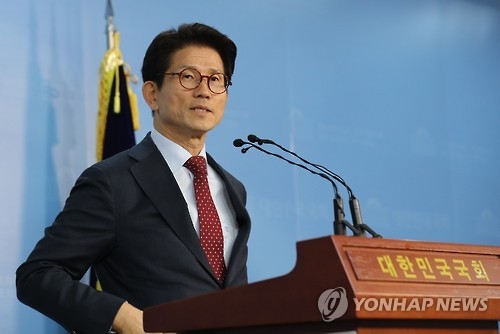 Even praising Park as one of the most "upright" politicians, Kim pointed out that her lack of communication with the press and her party rank-and-files led to the passage of the parliamentary impeachment motion.

Park was impeached by parliament on Dec. 9 over a corruption scandal involving her and her friend Choi Soon-sil. Both have denied all accusations.

The Constitutional Court has to determine whether to remove her from office or reinstate her by early June.