The KFA had been searching for a foreign coach to support national football team boss Uli Stielike since Shin Tae-yong left the coaching staff to manage the South Korea under-20 squad in November. However, the KFA announced earlier Monday that Seol Ki-hyeon, a member of the semifinalist South Korean team at the 2002 FIFA World Cup, will become the new assistant coach for the Taeguk Warriors.

Lee, who managed the coach hiring process, said the KFA negotiated with German and Swiss coaches for the national team job, but failed to land a contract with either of them because of the length of the proposed deal.

Lee, who is also vice president of the KFA, didn't identify the candidates.

"The candidates need to have the same contract period as Stielike," he said. Stielike is contracted until the end of the 2018 FIFA World Cup in Russia, should South Korea qualify for the competition.

"That means a successful candidate had to agree to coach for one and a half years, but it turned out the contract period was the biggest barrier." 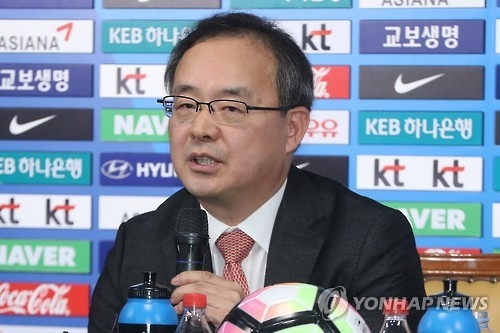 Lee said after the KFA found out that it'd be difficult to bring in a foreign coach, Stielike agreed to hire a South Korean coach since the national team couldn't waste more time.

Lee said the 62-year-old German head coach wanted a South Korean who doesn't have a lot of experience in coaching and who played as a forward or midfielder.

"We thought that if the assistant coach is too experienced, there could be a problem with Stielike when the two have different opinions," Lee said. "Stielike also said since the team's advance scout Cha Du-ri was a defender, he would prefer a coach who played as a midfielder or forward."

The KFA executive added Seol was the first among three South Korean candidates, but didn't give a full candidate list to Stielike.

"I first told him about Seol, and Stielike wanted to pick him," Lee said.

Seol, who has been coaching Seoul-based Sungkyunkwan University since 2015, doesn't have a coaching career with pro teams. Lee, however, said Seol's abundant experience in Europe and with the national team as a player will make up for his lack of coaching experience.

"Coaching experience is important, but we also looked at what he experienced as the national team player," he said. "Seol competed in two FIFA World Cups and played with European and South Korean clubs. Since he also managed players at the university, I'm sure he can serve the job well."