SEOUL, Feb. 6 (Yonhap) -- Moon Jae-in, a former leader of the main opposition Democratic Party, maintained a substantial lead in two-way hypothetical races with all potential rivals for the presidency, a survey showed Monday.

The survey -- commissioned by Yonhap News Agency and KBS, and conducted on Sunday and Monday by Korea Research Center -- found that Moon ranked first with 29.8 percent support, a gain of 8.2 percentage points from the previous survey released on Jan. 1. 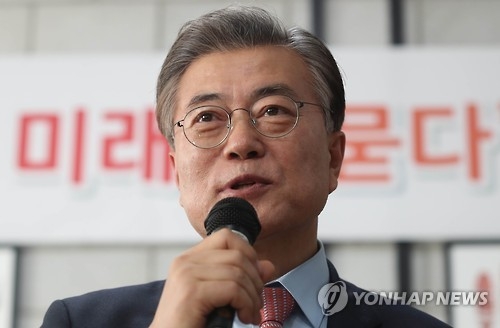 Ahn Cheol-soo, a former leader of the liberal People's Party, and Seongnam Mayor Lee Jae-myung were tied at 6.3 percent.

In a two-way race, Moon garnered a support of 52.3 percent, more than double the acting president's rating that stood at 23.6 percent. In separate competitions against Yoo and Ahn, Moon also maintained a comfortable double-digit lead.

In three-way races, Moon was way ahead of all other contenders as well.

Among the respondents who supported former U.N. chief Ban, 36.6 percent questioned said they would vote for the acting president, while 10.6 percent said they will consider supporting the South Chungcheong governor.

What was notable in the latest survey was the declining support for Lee Jae-myung, a vocal critic of impeached President Park Geun-hye who was seen as a up-and-coming opposition contender in the previous poll. His rating, which stood at 11.4 percent, nearly halved.

By party, the Democratic Party ranked first with 43 percent support, up 6.7 percentage points from the previous survey, followed by the Saenuri Party with 12.5 percent, the People's Party with 8.9 percent and the Bareun Party trailing at 7.0 percent.

The survey was conducted on 2,016 South Korean voters across the country. Its margin of error is plus or minus 2.2 percentage points.