Jung, better known by his nickname "Korean Zombie" for his aggressiveness, came home after clinching a first-round knockout against Dennis Bermudez at the UFC Fight Night 104 in Houston on Saturday. The 29-year-old landed an uppercut on Bermudez, who is ranked No. 9 in featherweight division, and finished the bout in just 2 minutes and 49 seconds.

It was Jung's first fight since August 2013, when he suffered a TKO loss to Jose Aldo in a championship match. After that, Jung left the Octagon for mandatory military service in South Korea. He was discharged from duty in October 2016.

Jung, who joined the UFC in 2011, said he might have a championship bout if he can win his next match.

"I'm ready to do my best against anyone," Jung said after arriving at Incheon International Airport. "Personally, I want to fight Holloway rather than Aldo."

Holloway, 25, is currently the interim featherweight champion. The American fighter is expected to take on featherweight title holder Aldo in the near future to unify the belts. Holloway won the interim title, which the UFC took away from then-two-division champ Conor McGregor, against Anthony Pettis in December. 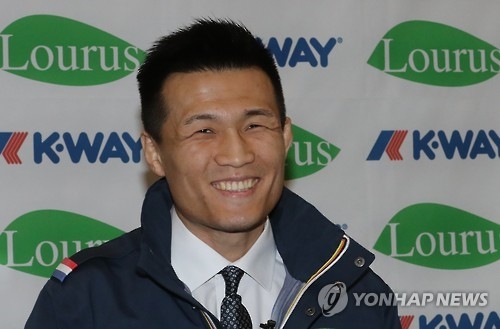 When asked why he didn't mention Aldo as his next opponent, Jung said he wants Aldo to hunt down McGregor, who is now the UFC lightweight champion. McGregor knocked out Aldo in 2015 in just 13 seconds.

"I'm a fighter, but at the same time, I'm also an MMA fan," he said. "Since McGregor moved up to lightweight division, I thought it will be nice for Aldo to follow him."

Against Bermudez, Jung said he only showed 10 percent of the movements that he had prepared for the match. The South Korean added his uppercut wasn't a planned move.

"It was my first time watching someone getting knocked out with my two eyes open," he said. "I prepared a lot, but things didn't go well."

Jung, who is now 4-1 at the UFC, said he is very much looking forward to competing at the UFC event in South Korea. After Jung's victory, UFC President Dana White told FOX Sports that Jung "sealed the deal," and added he will discuss going to South Korea with UFC owner Ari Emanuel.

The UFC previously staged fights in Seoul in 2015. Jung, however, couldn't fight then because he was doing his military service.

"I'm very hyped up," he said. "If the UFC holds events in South Korea this fall, I want to fight that time."

Jung is contracted for one more match at the UFC. The fighter was recently linked with a move to Bellator MMA, the world's second-largest MMA promotion.

"I haven't heard about a contract renewal from the UFC," he said. "There's a possibility (that I can go to Bellator), but I don't think it's necessary to move out of this good situation."