SEOUL, Feb. 7 (Yonhap) -- Construction of the 2018 PyeongChang Winter Olympic venues has entered the home stretch as some of the newly created facilities are set to welcome visitors this year by hosting test events.

A dozen venues -- seven for sports on snow and five for events on ice -- will be used during the first Winter Olympics in South Korea. Six are being constructed, while six other existing venues will be refurbished for the quadrennial competition in PyeongChang and its sub-host cities of Gangneung and Jeongseon in Gangwon Province.

As of January, the six new facilities are on average 96.3 percent complete, according to the organizers.

In addition to sports facilities, construction of other essential Olympic venues is being carried out as scheduled. The organizers expect that the International Broadcast Center building will be completed by April, while the athletes' village in PyeongChang and Gangneung will be built by no later than September.

The Olympic Plaza, where the opening and closing ceremonies will be staged, is only about 40 percent complete, but the organizers said it will be constructed by September with 35,000 seats.

The 12 venues are all located within 30 minutes of each other to meet the compact venue concept and the construction is also being carried out under the vision of making a "low carbon green Olympics."

The organizers are working toward providing electricity to venue cities by organizing a wind plant complex, building facilities to utilize geothermal and solar energy, and expanding the use of electric cars. 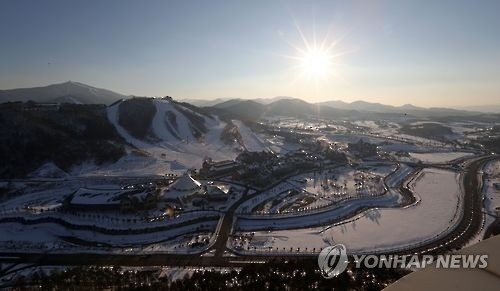 The 2018 Winter Games will have two "clusters": the PyeongChang Mountain Cluster for skiing and snowboarding competitions, and the Gangneung Coastal Cluster for hockey, curling and skating events.

In the PyeongChang Mountain Cluster, the Alpensia Sliding Centre, the venue for skeleton, luge and bobsleigh, and the Jeongseon Alpine Centre, the lone venue in Jeongseon, about 20 kilometers south of PyeongChang, are two new facilities built for the Olympics.

The Alpensia Sliding Centre will accommodate 7,000 spectators. The track there will have 16 curves and its total length will be 2,018 meters to commemorate the year in which the PyeongChang Olympics is being held. However, only 1,857 meters of the track will be used in actual competitions.

The place will be tested later this month when it hosts the International Luge Federation (FIL) World Cup, one of 15 test events of the PyeongChang Olympics set for this year.

The Jeongseon Alpine Centre will be home to the alpine speed events of downhill, Super-G and combined. It will accommodate 6,500 spectators and already hosted a test event last year.

To minimize the damage to Mt. Gariwang, where the alpine venue is located, the organizers combined the men's and women's courses into one field, the first such attempt at the Winter Games, to preserve more forest area around the course. 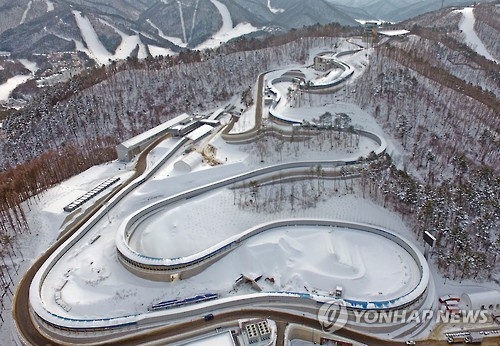 The Alpensia Ski Jumping Centre, constructed in 2009, will use two hills -- one, 98 m and the other, 125 m -- at the Olympics and will accommodate 13,500 people. The place has already hosted two international competitions and held the International Ski Federation (FIS) Nordic Combined World Cup, also an Olympic test event, last week.

The Alpensia Biathlon Centre and the Alpensia Cross-Country Skiing Centre are adjacent to each other and will each have 7,500 seats. Two facilities were built in 1998 but are currently going through renovations. The latter last week hosted the FIS Cross-Country World Cup and the skiers said the courses there are challenging but fun.

Bokwang Snow Park is the place where the Olympic snowboarding and freestyle skiing competitions will be carried out. It will host two World Cup events this week.

The Yongpyong Alpine Centre is home to the technical alpine skiing events of slalom and giant slalom for the Winter Olympics. It has been hosting various international competitions since 1998. 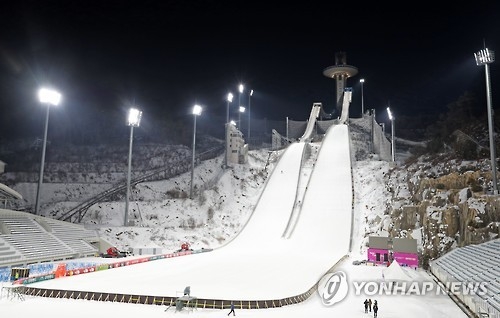 The Gangneung Hockey Centre is South Korea's first ice hockey-only facility. There will be 9,300 seats, and the closest distance between the ice rink and the seats will be 1.6 meters, allowing spectators to feel the excitement from the ice.

This place will serve as the main venue for the men's tournament and medal matches at the Olympics, while the Kwandong Hockey Centre, which is built on the campus of Catholic Kwandong University with a seating capacity of 6,000, will be used for women's competitions.

The Gangneung Ice Arena, the venue for short track and figure skating, has already staged international and domestic competitions. It has some 12,000 seats and has an air maintenance system that keeps the spectators' area at a temperature of 15 C (59 F) and 40 percent humidity. The system can also control the temperature of the ice rink surface so that the venue can stage both figure skating and short-track events on the same day.

The Gangneung Oval will be used for speed skating competitions during the Olympics. It has more than 8,000 seats, which are installed on a zig-zag platform, allowing spectators to get a better view for the races on ice.

The Gangneung Curling Centre, constructed in 1998, was previously used for major competitions like the Winter Asian Games and the World Championships. 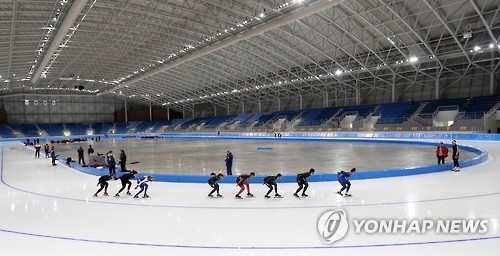 After the Olympics, South Korea plans to utilize the 12 sports venues and the Olympic Plaza. Ten of them already have post-games usage plans.

The organizers are mulling over using the Gangneung Oval and the Jeongseon Alpine Centre as training bases for national team athletes and a leisure complex.

PyeongChang in final stretch of venue construction for Winter Games

PyeongChang in final stretch of venue construction for Winter Games