According to the report based on the data of 25 members of the Organization for Economic Cooperation and Development between 1995 and 2014, an interest rate hike led to the conventional ripple effects of dwindling household consumption, a fall in stock prices and declining household debt in countries, with the ratio of people aged 65 and older reaching 15.4 percent and less.

In contrast, countries with higher ratios failed to experience statistically meaningful responses from rate hikes, said the report authored by Yoon Deok-ryong, a senior researcher at the Korea Institute for International Economic Policy, and Lee Dong-eun, who teaches at Korea University in Seoul.

"The analysis shows that the conventional spill-over effects of monetary policy on the real economy via the financial market are losing effectiveness with the aging of the population," the report said.

That's because population aging creates deflationary pressure, which leaves less room for changes in consumer spending, as well as adjustments of asset investments and debt, it added. 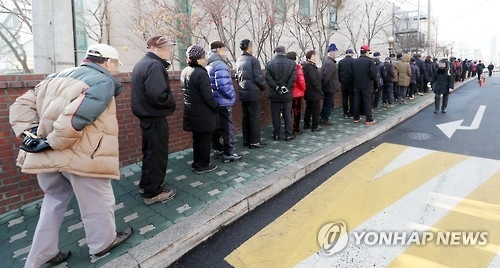 The report suggests that South Korea may undergo changes in the effect of its monetary policy within years in light of its rapid population aging.

In order to cope with the problem, South Korea should come up with ways to make its monetary policy more effective or develop alternative policies, the report suggested.

"The government should manage its fiscal health well so as to help make fiscal policies, if necessary, work effectively," it said. "Efforts should also be made to raise the country's chronically low birthrate, to accept immigrants positively and to push for labor reforms as the problem of population aging stems basically from the labor market."

South Korea has one of the lowest birthrates in the world. The country's total fertility rate -- the average number of children a woman bears in her lifetime -- stood at 1.24 in 2015, far lower than the replacement level of 2.1 that would keep South Korea's population of 51 million stable.
(END)