SEOUL, Feb. 7 (Yonhap) -- The government will install streetlights at over 770 pedestrian crosswalks as a way of reducing traffic accidents at sites that currently lack adequate lighting, the transportation ministry said Tuesday.

In 2015, more than 25 percent, or 1,168 people, out of the total 4,621 killed in traffic accidents were pedestrians using crosswalks, according to the Ministry of Land, Infrastructure and Transport.

Also, more than 62 percent of all accidents at crosswalks took place at night, apparently suggesting a lack of sufficient light may have played a role.

The ministry said additional lighting at 29 locations previously prone to accidents had helped reduce the number of incidents at those sites to 16 in 2015 from a two-year average of 39 over the 2012-2013 period.

"To repeat such prevention of accidents throughout the rest of the country, the ministry examined each and every crosswalk on national roads and came up with a plan to install new streetlights in 772 areas," the ministry said in a press release.

It will cost nearly 25 billion won (US$22 million) over the next five years to install new streetlamps at the locations and replace aged streetlamps at an additional 1,921 locations, the ministry added. 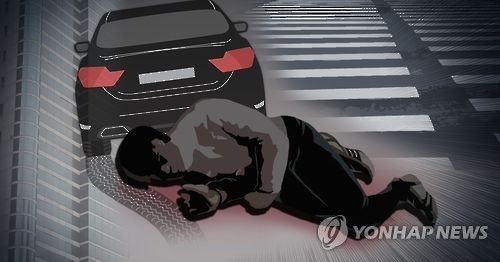 Gov't to install new streetlamps at over 770 pedestrian crossings

Gov't to install new streetlamps at over 770 pedestrian crossings