SEOUL, Feb. 7 (Yonhap) -- A former culture minister and an ex-presidential chief of staff were indicted Tuesday over allegations they created a blacklist of cultural figures deemed critical of the Park Geun-hye administration, investigators said.

The probe team, led by Independent Counsel Park Young-soo, said ex-Minister Cho Yoon-sun and former top presidential secretary Kim Ki-choon have been charged with abuse of authority and coercion for allegedly interfering in ministry officials' duties by creating and managing the blacklist to deny those artists state support.

Both have also been charged with perjury for denying the allegations during a parliamentary hearing held last year.

Former senior presidential secretary Kim Sang-yule and ex-presidential aide Kim So-young were indicted without detention on the same day for their alleged involvement with the blacklist.

President Park has been mentioned in the indictment papers for her involvement in the alleged irregularities, the probe team's spokesman Lee Kyu-chul said during a regular press briefing. He declined to elaborate further.

Park, who is awaiting the Constitutional Court's decision on her impeachment, has flatly denied complicity.

The probe team and the presidential office Cheong Wa Dae are in talks over when and how to carry out a face-to-face questioning of Park, which would be the first interrogation of an incumbent South Korean president in a criminal case.

Lee, the spokesman, said they expect the questioning to take place at around Friday. 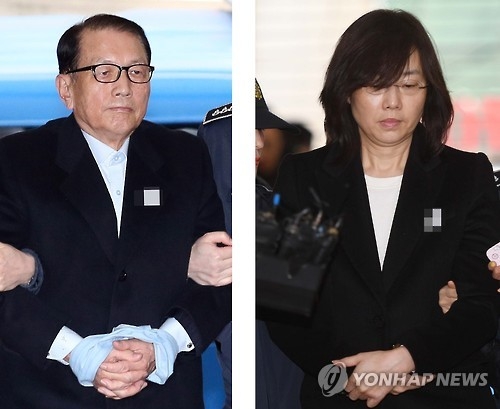