SEJONG, Feb. 7 (Yonhap) -- South Korea launched a joint committee of the government and the private sector to coordinate policies on the car industry, which has been suffering from contracted demand at home and abroad, the government said Tuesday.

"The South Korean car industry is at a turning point amid the ongoing fourth industrial revolution, rapid growth of China and India, and rising uncertainties in global trade," Trade Minister Joo Hyung-hwan said in a kickoff meeting of the joint committee in Seoul.

"In order to gain competitiveness of the car business, we need a control tower to map out a future plan and coordinate policies."

He said the country will focus on fostering renewable-energy vehicles, such as electric and self-driving cars, as a new growth engine.

The government will push forward with building 20,000 electric charging stations across the nation as a measure to raise the electric car market share to 1 percent in the country.

To keep up with the move, five local carmakers led by industry leader Hyundai Motor Co. will invest a combined 4.7 trillion won in the futuristic car sector in 2017.

The combined global sales of the South Korean automakers fell 1.3 percent on-year to 8,890,530 cars last year due to a decline in overseas sales stemming from faltering demand from emerging economies. 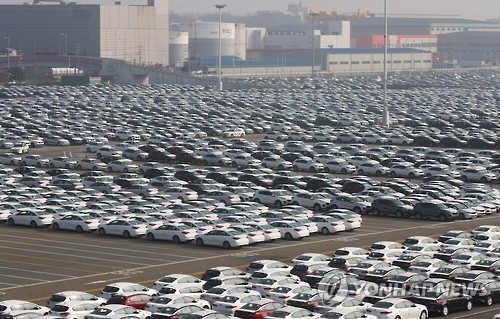