SEOUL, Feb. 7 (Yonhap) -- The Constitutional Court appeared unlikely to rule on President Park Geun-hye's impeachment before March as it proceeded Tuesday to schedule additional hearings for later this month.

The extra hearings will be held through Feb. 22, acting Chief Justice Lee Jung-mi said during the 11th hearing, effectively eliminating the possibility of a ruling this month. 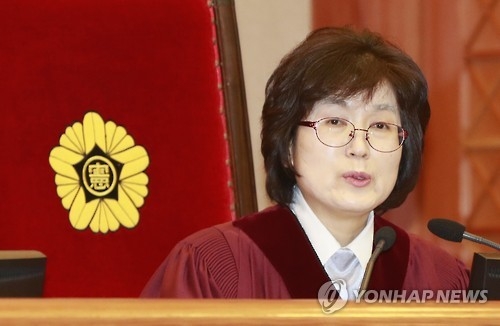 Supporters of Park's impeachment had hoped the court would unseat the president before Feb. 28 to forcibly subject her to a special prosecutors' investigation. The probe was launched in December with a Feb. 28 deadline to look into a corruption and influence-peddling scandal that led to Park's impeachment. While in office, she remains immune from prosecution.

Still, the court's decision leaves time for a ruling before March 13, when Lee is set to retire, creating a second vacancy on the nine-member bench. Lee took over from Chief Justice Park Han-chul, who retired at the end of last month. After Lee's retirement, chances are higher that Park will be reinstated because at least six justices must endorse the impeachment to remove her from office.

Both Park's lawyers and the National Assembly protested the court's announcement.

"We are quite dissatisfied that only eight of the 17 witnesses we asked for were accepted," Lee Joong-hwan, an attorney for Park, said in a press conference.

Rep. Kwon Seong-dong, who leads a parliamentary panel serving as the prosecution, expressed strong regret at the court.

"President Park's side requested a large number of witnesses with the aim of stalling the proceedings and the court accepted half," he said in a separate press conference. "By calling in An Chong-bum and Choi Soon-sil, who have already testified once, (the court) is overly clinging to fairness."

Choi is Park's friend of four decades who is suspected of abusing her ties to the president to meddle in state affairs and extort money from conglomerates. Park was impeached by parliament after being named an accomplice in Choi's suspected crimes, but both have denied all charges.

The court rejected the summons of Samsung's de facto leader Lee Jae-yong and three other chiefs of conglomerates who are suspected of making huge donations to two nonprofit foundations linked to Choi. Prosecutors claimed the donations were made in return for business favors, although business leaders countered they contributed money because they were told it was for good causes.

"The business leaders have already testified at parliamentary audits and hearings, and their testimonies are not necessary following the National Assembly's reorganization of its impeachment grounds," Justice Lee said.

Two witnesses testified during Tuesday's hearing after the third witness Kim Ki-choon, a former presidential chief of staff seen as a key witness in the trial, submitted a statement to the court Monday to indicate his planned absence. He cited health issues.

Jeong Hyun-sik was the first to testify on allegations Choi forced conglomerates to make donations to the K-Sports Foundation, which she allegedly controlled and where he worked as the secretary-general.

"Without naming Choi Soon-sil, I once asked senior presidential secretary An (Chong-bum) if he could verify whether this woman who was giving guidelines (for the foundation's operation) shared the same intentions as the executive (the president)," Jeong recalled, noting that Choi had no official title but oversaw everything from hiring and assigning work to salary-setting.

Jeong claimed An, a former senior secretary for economic affairs and then for policy coordination, was deeply involved in the foundation's work, which led him to believe An was acting on the president's orders.

Later in the day, former Culture Minister Kim Jong-deok was questioned on allegations Park forced the resignations of senior ministry officials for their noncooperation in the execution of a supposed blacklist of artists critical of the conservative administration. 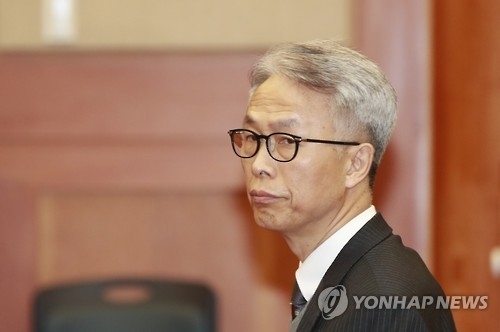