SEOUL, Feb. 7 (Yonhap) -- South Korea's Acting President and Prime Minister Hwang Kyo-ahn on Tuesday warned of North Korea's possible strategic provocations ahead of the birthday of its late former leader next week, stressing the need for Seoul to maintain strong security cooperation with its ally Washington.

"North Korea's threats of provocations -- including its claim that it is in the closing phase of preparations to launch an intercontinental ballistic missile -- are increasingly explicit," Hwang said. 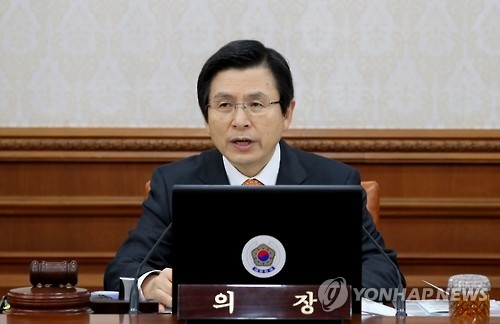 "Especially this month, which includes the 75th birthday of (former North Korean leader) Kim Jong-il, the likelihood of strategic provocations is higher than before," he added. The late Kim's birthday falls next Thursday.

Since the beginning of this year, Pyongyang has been ratcheting up military tensions with a series of statements that indicate it is close to mastering the technology for an ICBM. The North has also claimed it is capable of launching an ICBM "at any time from any place."

"I urge (the military) to stay alert so that it can sternly and immediately respond to any kind of provocation," Hwang said.

The acting president also called on the government to thoroughly prepare for the 2018 Olympic & Paralympic Winter Games, saying that the games will be an opportunity to let the world know better about the country.

Hwang, in addition, directed related ministers to draw up a comprehensive strategy to more proactively respond to the fourth industrial revolution, the fast-paced transformation marked by the convergence of cutting-edge technologies such as big data, artificial intelligence and the Internet of Things.