SEOUL, Feb. 7 (Yonhap) -- Kim So-hye from disbanded girl group I.O.I marks the beginning of spring by posting photos of herself in bright and fancy hanbok, or Korean traditional dress.

A short video clip released Monday shows the singer overflowing with elegance in a pastel hanbok with a flowery pattern. The photos have piqued the interest of fans as to what are the multi-faceted artist's activities this year.

Kim, who originally trained to become an actress before becoming a singer, will be making her acting debut with the TV series "First Love" set to premiere in March.

After creating her own agency S&P Entertainment in June 2016, Kim has been involved in various activities. She joined SBS' K-pop music radio station Bae Sung-jae's Ten Radio as a fixed member, appeared in various music videos such as girl band The Ark's debut single "The Light," and was a regular host of variety shows "Star Show 360" and SBS' "Game Show Yoo Hee Nak Rak." Moreover, she opened a coffee shop in Seocho Ward in southern Seoul to provide a space where she and her agency can connect with fans.

Kim became widely recognized after her singing career with I.O.I, which made its debut through cable broadcaster Mnet's hit idol audition entertainment show "Produce 101" in May 2016. From a pool of 101 trainees who battled for the top spots from various entertainment companies, 11 girls emerged victorious. Kim ranked 5th. They formed a one-year project group that soared to the top of the K-pop industry with two EPs and a subunit single. The group's concert in January marked its last group activity on stage. 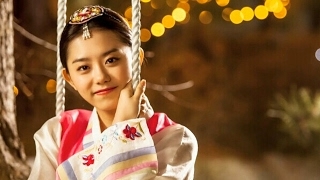