SEOUL, Feb. 7 (Yonhap) -- South Korean households benefited less from the country's economic growth in 2015 than a year earlier, data showed Tuesday, as their income stagnated amid corporate reluctance to invest.

According to the data by the Bank of Korea (BOK), households and nonprofit organizations serving them recorded a combined income of 970.4 trillion won (US$853 billion) in 2015, or 62 percent of the country's gross national income at 1,565.8 trillion won.

The percentage was down 0.1 percentage point from the precious year. The figure had been on the decline since peaking at 72.8 percent in 1998 when the country was in the heat of a foreign exchange crisis.

The portion for companies also edged down 0.02 percentage points to 24.6 percent, but it had been on the rise over the past 20 years.

Experts attributed the downturn in households' portion mainly to a decrease in companies' domestic investment that results in dampening household income. 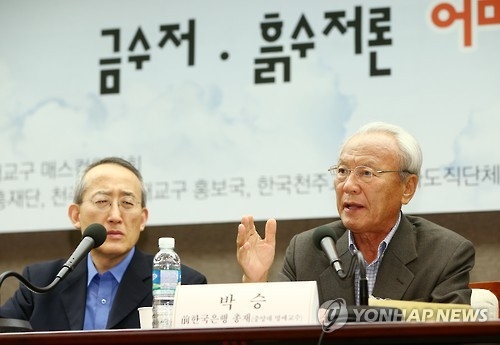 South Korean companies are awash in cash as their investment confidence has weakened significantly amid the prolonged sluggishness of the local economy and escalating uncertainty over the future.

According to market data, the listed subsidiaries of South Korea's top 10 business groups had 550 trillion won in retained earnings as of end-June 2016, up 0.6 percent from six months earlier.

Economists call on the government and large companies to make concerted efforts to raise household income, which will eventually help boost the growth of Asia's fourth-largest economy.

"It would be good to increase the income of nonregular workers and employees of small and medium enterprises via a social agreement as part of efforts to promote shared growth," said Professor Kim Jung-sik, who teaches at Yonsei University in Seoul.
(END)