SEOUL, Feb. 7 (Yonhap) -- The floor leader of the conservative opposition Bareun Party on Tuesday proposed creating a bipartisan security policy consultative panel, warning against some presidential aspirants' "populist" arguments on North Korea and national defense ahead of a key election this year.

During his address to the National Assembly, Rep. Joo Ho-young also called on political parties to accept a Constitutional Court ruling on President Park Geun-hye's impeachment to be delivered by early June and voicing concerns about possible national division over the decision.

The minor party was launched last month, led by some 30 lawmakers who defected from the ruling Saenuri Party amid a factional feud over the scandal involving Park. 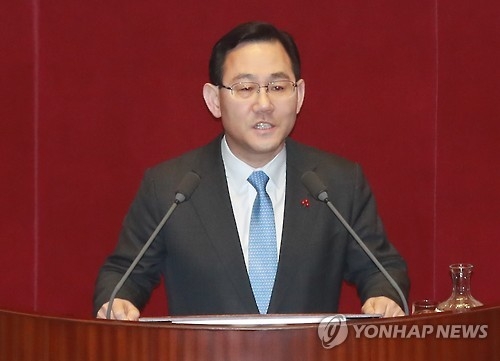 Joo denounced some liberal presidential hopefuls who have made a set of proposals such as shortening the compulsory military service term, which experts criticized as "populist" in consideration of the fast-graying country's projected shortage of draftees.

"We must definitely eschew security populism at a time when the two Koreas are in a standoff," he said. "It is quite worrisome that some of politicians with an unstable view of security have been causing more public (security) concerns."

Touching on the impeachment trial, Joo urged the parties to uphold the court's decision to minimize possible social and political repercussions.

"Whether the Constitutional Court would rule in favor of the impeachment or against it, the decision is a final confirmation of the constitutional spirit, and we all have to concede the ruling," Joo said.

On the hot-button issue of revising the Constitution, Joo called for a referendum on the amendment in June next year -- when the nation holds gubernatorial and mayoral elections. He said a major overhaul of the government structure through a revision would be a time-consuming process that can hardly be completed before a presidential election this year.

"What the National Assembly should do right now is craft a roadmap for the procedures and timing for the revision and ensure that the next president will clearly enforce it," he said.