SEOUL, Feb. 7 (Yonhap) -- North Korea is compelling discharged soldiers to settle in areas that were devastated by floods during a powerful typhoon in August last year as there were more new houses constructed than people can live in, a U.S. broadcaster said Tuesday.

A resident of Pyongyang who visited China told the Radio Free Asia (RFA) that the North Korean authorities are forcing former servicemen to live in houses left over in North Hamgyong Province, adding he learned about it through acquaintances living in the northern province.

"Discharged soldiers' relocation to the area is expected to begin in earnest around March when the weather will get better," the source was quoted as saying.

The source attributed the leftover new houses to a higher number of people who died or were unaccounted for in the disaster than the official tally, and to many other people leaving the area to pick up lots in other areas.

Another source in North Pyongan Province said the North will not let just any discharged soldier settle in the northern part of North Hamgyong Province because the area borders China.

"Those discharged soldiers are strictly screened for their allegiance to the party, among other things," the source said. 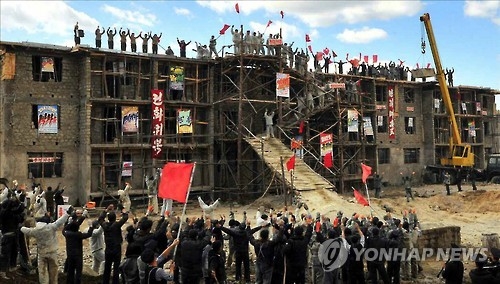