The Ministry of National Defense has recently sent a letter asking if the five counties all located 300 kilometers south of Seoul, are interested in hosting an airport that will also serve as a military airbase, a ministry spokesman said.

The five counties are Guneui, Uiseong, Goryeong and Seongju in North Gyeongsang Province and Dalseong, a district in Daegu, the country's third-biggest city after Seoul and Busan.

"Once we select a preliminary site, residents will be given the opportunity to vote on whether to accept or reject building the airport in their region," the spokesman said.

There may be two counties competing for the new airport depending on the government's investment plans to stimulate the local economy, he said, adding the ministry called on the five counties to provide answers by Friday.

The final site will be selected this year after going through proper procedures, he said without elaborating.

The government has been seeking to move the existing airport in line with persistent demands from local residents who have complained of aircraft noise, development restrictions and other issues.

The relocation project was put on a fast track after President Park Geun-hye asked her government in July last year to forge ahead with the move. 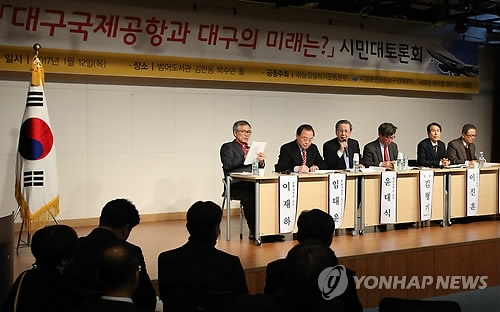