SEOUL, Feb. 7 (Yonhap) -- Acting President and Prime Minister Hwang Kyo-ahn on Tuesday repeated his ambiguous stance over whether to run in the presidential election this year, saying he will clarify it at an "appropriate" time.

In a meeting with reporters, Hwang made the remarks, reinforcing speculation that he could join the election that could come earlier than expected due to President Park Geun-hye's impeachment. Originally voters were set to go to the polls in December to pick the next chief executive.

"There will be an appropriate time (when I will clarify my position)," Hwang tersely said after attending a parliamentary session. 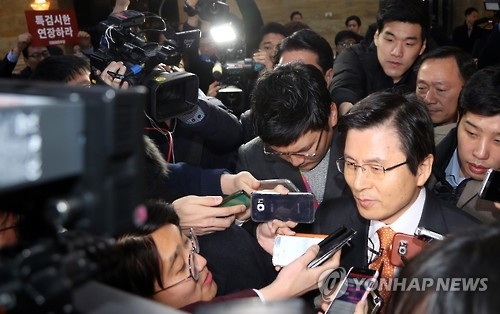 During a press conference last month, Hwang refused to touch on the political issue, saying that "for now," he has to focus on normalizing state affairs that have been hamstrung by a corruption scandal involving Park and her longtime friend.

After former U.N. Secretary-General Ban Ki-moon renounced his presidential ambitions on Wednesday, Hwang is being touted as Ban's potential replacement as a standard-bearer of the conservative bloc.

The survey -- commissioned by Yonhap News Agency and KBS, and conducted on Sunday and Monday by Korea Research Center -- found that Hwang ranked third with 11.2 percent support, up 7.8 percentage points from the previous survey released on Jan. 1.

In the survey, Moon Jae-in, a former leader of the main opposition Democratic Party, maintained a comfortable lead with 29.8 percent support, a gain of 8.2 percentage points, trailed by South Chungcheong Province Governor An Hee-jung with 14.2 percent, up 9.6 percentage points.