SEOUL, Feb. 7 (Yonhap) -- LPGA Hall of Famer Park In-bee said Tuesday she has fully recovered from a hand injury as she gets ready to make her season debut later this month.

The former world No. 1 was limited to 10 LPGA events in 2016, while bothered by a left thumb injury. She battled through pains to win the gold medal at the Rio de Janeiro Olympics in August but had to shut down for the rest of the season.

At a corporate event in Seoul on Tuesday, Park said she spent the past seven weeks training in Las Vegas without pain, and she's ready to return to the tour at the Honda LPGA Thailand in Chonburi, Thailand, starting on Feb. 23.

"I am excited but a little apprehensive at the same time, because I've been away from the tour for so long," said Park, whose last LPGA appearance came in June. "I hope to play well in the first couple of events and go from there."

Park, a seven-time major champion and an LPGA Hall of Famer, said she was pleased with most aspects of her game during her U.S. training, though she won't really find out how far she has come along until she gets into competitions.

"The biggest goal for me this year is to play the whole season without getting injured," she said. "I want to be able to shake off rust and play my 'A game' as soon as I can. Obviously, I won't get to that point right away, but I think I'll get my feel back after a couple of tournaments."

Though she was able to swing the club the way she wanted without pains during her offseason sessions, Park said she still wants to be careful so as not to sustain another injury. 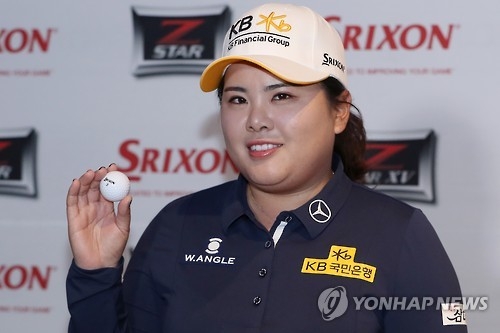 Park noted that getting ready for the 2017 season has also been a good learning experience.

"I think it gave me an opportunity to understand my swing better," she said. "I spent the majority of the time on shot-making. I putted so well at the Olympics, and the goal is to putt as well as I did back then."

Park said her struggles last season reminded her of the importance of conditioning, though she's not going to push herself too hard from start to finish.

After the Olympics last year, Park said she would consider scaling back her playing schedule. In 2015, she played in 25 out of 31 LPGA events, and 23 out of 32 the year before that.

"I'll try to play as much as I can early on to get into the groove, and I'll see how I feel afterward," she said. "I'll build my schedule around the major championships. Whereas I've played around 25 tournaments a season in the past, I think I'll maybe enter around 20 or so events this year."

Park, 28, said she's also had to overcome some mental blocks ahead of the new season.

"Last year, I developed fears of failure, and I was often worried about what would happen if I didn't play well," she said. "The more I accomplished, and the more famous I became, the pressure kept on building. But I'll go back to the drawing board this year and try to enjoy myself on the course."

During her absence, Park has slipped several notches on the world rankings. She dropped to No. 11 on Dec. 19, falling out of the top 10 for the first time since August 2012.

Though Park admitted her "ultimate goal" is to regain the top ranking that she held from 2013 to 2014, she said she is more concerned about the journey, not the destination.

"I am not in any rush," Park said. "The primary goal is to complete the season without an injury, and I think all other things will follow if I can do that."