HANOI, Feb. 7 (Yonhap) -- Hyundai Motor Co., South Korea's biggest automaker, has set up a joint venture with its Vietnamese partner Thaco to expand production of commercial vehicles as part of its efforts to increase its presence in the Southeast Asian market, industry sources said Tuesday. 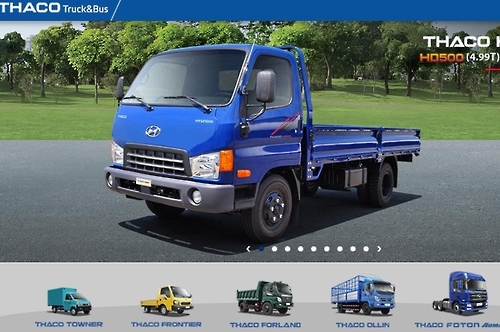 The establishment of the 50-50 joint venture is a departure from Hyundai's commissioning of Thaco to produce and assemble its commercial vehicles.

A source with knowledge of the local industry said Hyundai has invested some US$100 million in the joint venture and production expansion as part of its strategy to foray into the Southeast Asian region as well as Vietnam.

The South Korean automaker tops the list of players in the 2.5-ton or higher truck and bus segment, accounting for more than 25 percent of the Vietnamese market. Hyundai's sales in 2016 soared 23 percent from a year ago to 112,332 vehicles.

Through the planned production expansion, Hyundai aims to meet the growing demand in Vietnam, which has seen its annual economic growth at a clip of 6 percent.

The production expansion is seen as Hyundai's scheming to turn Vietnam into a bridgehead for tapping into the 10-member Association of Southeast Asian Nations. Hyundai is to reap the fruits of economic integration in the region with the establishment of the ASEAN Economic Community, or AEC, in 2015, to remove tariffs on commercial vehicles in phases.