SEOUL, Feb. 7 (Yonhap) -- Jeonbuk Hyundai Motors' left back Kim Jin-su on Tuesday lamented his club's expulsion from the premier Asian club football competition this year, but said he is still determined to play well in the country's top pro league.

Kim joined Jeonbuk, the reigning Asian Football Confederation (AFC) Champions League winners, on a four-year deal last month after ending his stint with German Bundesliga club Hoffenheim. The 24-year-old defender is a native of Jeonju, North Jeolla Province, the hometown of Jeonbuk, but has never played in the K League Classic.

"It's true that I wanted to play at the AFC Champions League (ACL)," Kim said at a press conference after signing a sponsorship deal with sporting goods manufacturer Puma. "It's a pity that the club can't compete, but the ACL is not the only reason I returned to South Korea."

The Entry Control Body, a judicial body independent of the Asian Football Confederation (AFC), last month barred Jeonbuk from the 2017 AFC Champions League for their "indirect involvement in activities aimed at arranging or influencing the outcome of matches," following the club's bribe scandal.

Last September, one of Jeonbuk's scouts was convicted of bribing referees in 2013. They were docked nine points by the K League's disciplinary committee -- which cost them a chance to win their third straight domestic league title -- and were fined 100 million won (US$85,600).

Jeonbuk then challenged the ECB's decision at the Court of Arbitration for Sport (CAS), but the world's top sports tribunal last week rejected the South Korean club's appeal.

The ruling confirmed that Jeonbuk, which beat Al Ain of the United Arab Emirates (UAE) at last year's ACL final, will not have a chance to defend their continental title. 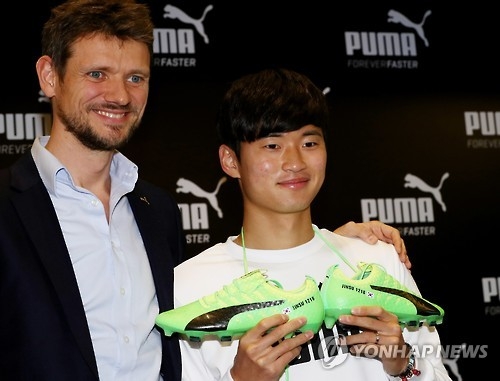 Kim, who signed with Jeonbuk before the ECB verdict, said he doesn't regret joining the South Korean club. The footballer added he will compete in the K League with a challenger's mindset.

"Jeonbuk are a very important club for me, and I made a crucial decision in my career to join this club," he said. "I know that fans have big expectations of me, and it all depends on how I perform here."

"Each team has its own style of play, and the player needs to adjust to it," he said. "I've talked a lot with striker Kim Shin-wook. I felt that he is a really important player not only for the club, but for the national team."

Kim has 22 caps for South Korea, but hasn't represented the Taeguk Warriors since March 2016.

Playing alongside Jeonbuk's star players like Lee Jae-sung and Kim Bo-kyung, Kim said he is confident of showing a good performance.

"I'm confident of playing well, but it's the coach who decides whether I get to play or not," he said. "I will first try to defend perfectly before moving forward. But I want to score some goals."